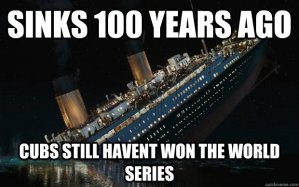 The New York Mets and Chicago Cubs face off on Saturday in the NLCS, and fans are having some fun mocking the Cubs’ lack of World Series win since the early 1900s.

The Chicago Cubs won their last world series 1908. To put it in perspective, that’s before World War I and II and the Great Depression happened,  before hairdryers were invented, and when Theodore Roosevelt was the U.S. president.

To give the team some credit, they were the first team to win back-to-back World Series. The Cubs won their first world series in 1907 against the Detroit Tigers. More than 100 years later though, the team haven’t been able to get that coveted title back.

Cubs fans are hoping to make an epic comeback, and they even have a “Back to the Future II” prediction on their side. In the 1989 film, main character Marty McFly traveled from 1985 to 2015 (his future for him) and saw a hologram-news report that announced the Cubs as World Series Champions against Miami, which was a non-existent team then.

Marty McFly’s prediction is becoming more of a reality, but Mets fans are hoping to squash that in the next couple of games. The Mets are also in a World Series drought — the team hasn’t won a world series since 1986.

Game 1 of NLCS is on Saturday night at Citi Field.