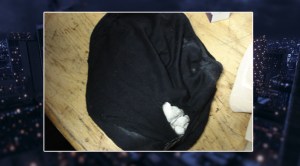 While passing through security April 12, Guyanese citizen Olive Fowler became nervous as border patrol agents went through her suitcase, according to officials, and they took her to a private room for a physical search.

SEE IT: Passengers who thought they could outsmart TSA and failed

Upon inspection, CBP officers pulled roughly 4 lbs. of cocaine out of packages hidden in a girdle and the underwear she had under her clothing, officials said.  The street value is estimated at more than $73,000.

“This seizure is just another example of our CBP officers being ever vigilant in protecting the United States from the distribution of these illicit drugs,” said Robert E. Perez, Director of CBP’s New York Field Operations.

Fowler faces felony narcotics smuggling charges and is due to appear in U.S. Eastern District Court.