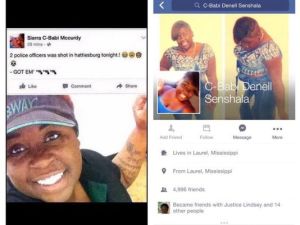 Screenshots taken by The Clarion-Ledger show a Facebook user’s posts about two slain Mississippi police officers. She was later fired from her job at Subway. (Photo: Facebook)

LAUREL, Miss. (PIX11) — A fast-food worker is out of a job after she allegedly posted on Facebook celebrating the deaths of two Mississippi officers, gunned down during a traffic stop over the weekend, officials said.

A woman who identifies herself as Sierra C-Babi McCurdy on the social media site used emojis of a gun and laughing faces with the following post: “2 police officers show in hattiesburg tonight. GOT EM.”

In some posts, she is pictured wearing a Subway uniform.

McCurdy’s former employer released a statement to The Clarion-Ledger saying she had been fired in wake of the posts.

“This kind of behavior is unacceptable and does not represent the values and ethics of our brand,” a Subway spokesperson told the news outlet. “The unfortunate choice of one individual should not reflect on the more than 400,000 honest, hardworking Sandwich Artists worldwide. The franchisee has terminated the employee, effective immediately.”

The posts referred to the deaths of officers Benjamin Deen, 34, and Liquori Tate, 25. Deen and Tate pulled over a car about 8:30 p.m. on Saturday in Hattiesburg, Miss., and were shot. Both men were rushed to a hospital where they died.

Subsequent posts made on the same account referenced Baltimore, where six officers have been charged in the death of Freddie Gray, a 25-year-old man “illegally arrested” who later died from injuries he suffered while in police custody, according to the city’s lead prosecutor.