NEW YORK — Snow began to falling on parts of Long Island a little after 6 a.m. Monday and will continue into the evening.

A winter weather advisory and a coastal flood advisory have been issued by the National Weather Service for parts of the tri-state as the storm inches its way closer to the area.

The National Weather Service issued a coastal flood advisory for the coastal areas of New Jersey, Delaware, Nassau and Suffolk County early Monday morning. It will remain in effect until 4 a.m. Tuesday.

Minor coastal flooding is expected to develop as early as Monday morning.

A winter storm warning is in effect for Suffolk County until 6 p.m. 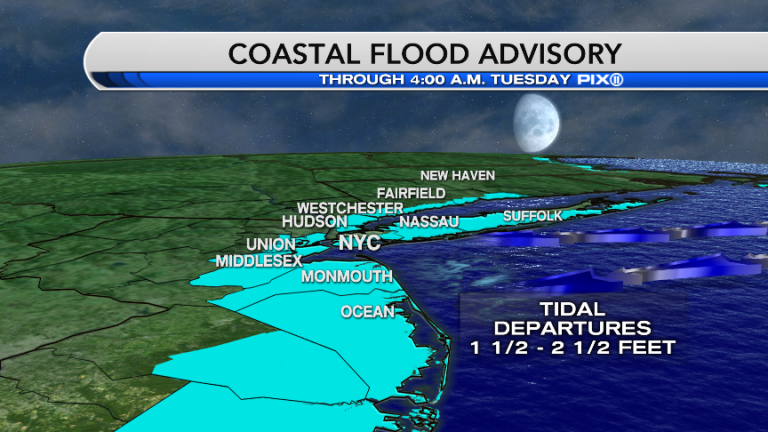 The advisory was issued just hours after a snow alert was announced to prepare crews for the possibility that sanding, salting and potential plowing operations will likely be needed, according to the NYC Department of Sanitation.

The advisory means periods of snow and possibly sleet which could make travel conditions hazardous.

New Yorkers are also encouraged to sign up for the Notify NYC, the City’s free emergency notification system. Through Notify NYC, New Yorkers can sign up to receive phone calls, text messages, and emails alerts about severe weather events and emergencies.