MANHATTAN (PIX11) — Rescue crews cut through a window on the 69th floor of 1 World Trade Center Wednesday and pulled to safety two workers who dangled high above the ground for some 90 minutes, trapped inside broken scaffolding.

Crews rushed to the scene about 12:45 p.m. after callers reported seeing a broken scaffold hanging off the high-rise. With workers outside the 68th floor, the scaffold tilted dangerously after slack developed on the west side of the platform, according to FDNY officials.

Because the windows do not open, a human-sized rectangle was cut into the pane — through three layers of glass —  so the workers could slip inside the building. They were rescued about 2:15 p.m.  Both workers were taken to the hospital for a mild case of hypothermia.

“We prepared for this and that’s why everyone is going home safe tonight,” said Pat Ford, spokesman for the Port Authority of New York & New Jersey, the agency that owns the building.

Crews appeared to be working from inside and outside of the high-rise to rescue the pair.

Footage from the ground showed a second scaffold — likely with rescuers inside — being lowered from the top of the 104-story high-rise. That second basket did not appear to be used further.

“We are extremely grateful to the professionals at the FDNY, PAPD and NYPD for their rescue of the workers,” Jordan Barowitz, a spokesman for the The Durst Organization, the management company for 1 WTC, said in a statement to PIX11.

Opened to the public in 2014, 1 World Trade Center encompasses 3 million square feet and soars 104 stories into the air. 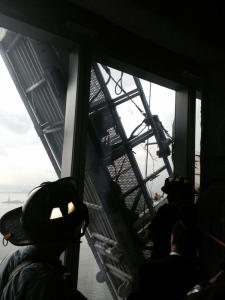 The elevation at which the rescuers were working raised concerns about wind hindering their efforts. Gusts were a variable 6 mph on the ground in lower Manhattan Wednesday afternoon, according to the National Weather Service.

The broken basket appeared to be stable throughout most of the rescue and the workers were tethered inside, though the scaffold’s cables were swaying in the breeze.

It was not immediately known how the scaffolding came to dangle in such a perilous position. An investigation is underway.