WASHINGTON, D.C. (PIX11) – The White House is finally addressing President Obama’s highly-controversial press briefing Thursday — a media event that spiraled into Bengazi-esque levels of Internet debate because of his decision to wear a tan suit.

“Before we get started, just for the sake of efficiency I know that there’s at least one aspect of the president’s news conference yesterday that attracted some attention,” White House press secretary Josh Earnest said Friday.  “So I thought I would just go over one aspect of that argument — and it’s exactly this, the president stands squarely behind the decision that he made yesterday to wear his summer suit at yesterday’s news conference.” 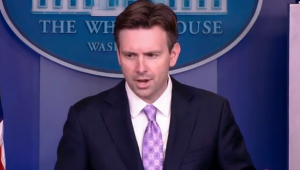 Earnest broke into a smile as the assembled media let out a laugh — although surely a possible tan suit question had already been jotted down in many a notebook.

“It’s the Thursday before Labor Day, he feels pretty good about it,” Earnest added.

Proof that Hilary is not the only one who gets criticized for her pantsuits? #tansuit

.@MichelleObama Divorce him & let me be your rock. I have never & will never wear a #TanSuit.

President Obama is here to sell you tornado insurance pic.twitter.com/RYeWlKAm79

I’m not that into you but I thought the #tansuit was #trill. Go’head, Barry.

I’m sorry but you can’t declare war in a suit like that.

twitterverse calm down. We can survive the #tansuit

Who gave President Obama that old church suit from my dad’s closet?

The Audacity of Taupe pic.twitter.com/3EC7NN0By8

This suit is the boldest thing Obama’s done in months.

Obama vows to defeat whoever made him wear this suit. pic.twitter.com/zoqj7OVFRe