The Facebook logo is displayed at the Facebook Innovation Hub on February 24, 2016 in Berlin, Germany. (Sean Gallup/Getty Images)

The Facebook logo is displayed at the Facebook Innovation Hub on February 24, 2016 in Berlin, Germany. (Sean Gallup/Getty Images)

NEW YORK —Facebook CEO Mark Zuckerberg is preparing for two days of testimony before Congress as the social media company works to inform some 87 million users that their data may have been shared in the Cambridge Analytica scandal.

This has some asking, what is “This is Your Digital Life” — the app at the center of the controversy?

On Monday, the company began rolling out a “see how you’re affected” tool at the top of people’s News Feeds. All 2.2 billion Facebook users should eventually receive a notice titled “Protecting Your Information,” with a link to see what apps they use and what information they have shared with those apps. If they want, they can shut off apps individually or turn off third-party access to their apps completely.

Notifications will also let users know if they’re among the tens of millions who had their data improperly accessed by Cambridge Analytica.

We have banned the app ‘This Is Your Digital Life,’ which one of your friends used Facebook to log into. We did this because the app may have misused some of your Facebook information by sharing it with a company called Cambridge Analytica. In most cases, the information was limited to public profiles, Page likes, birthday, and current city. 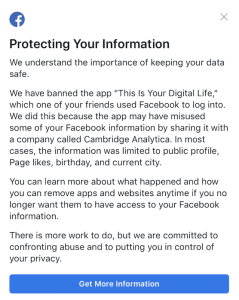 The app vacuumed up not just the data of the people who took it, but also — thanks to Facebook’s loose restrictions — data from their friends, too, including details that they hadn’t intended to share publicly.

The data collection was allowed by Facebook at the time. However, Facebook has said that Kogan violated its terms of service by giving the information to Cambridge Analytica.

Facebook banned Kogan and Cambridge Analytica from its platform last month, ahead of a New York Times investigative report about how the data was passed on.

Zuckerberg said Facebook came up with the 87 million figure by calculating the maximum number of friends that users could have had while Kogan’s app was collecting data. The company doesn’t have logs going back that far, he said, so it can’t know exactly how many people may have been affected — making some fear it could be more.

Cambridge Analytica said in a statement last Wednesday that it had data for only 30 million Facebook users.

In an effort to restore public trust in Facebook, Zuckerberg is set to testify about the controversy before Congress Tuesday and Wednesday.

Workout gloves come in a variety of styles. Some have a minimalist design with a slim build and open back.

Whatever type of weight bench you prefer, there are many things to consider when choosing one, including the weight limit.

Squash tournament of champions wraps up at Grand …

Dozens without a home as a fire rips through a building

Moose on the Loose: Jalen Hurts

Squash tournament of champions wraps up at Grand …