NEW ROCHELLE, New York (PIX11) — A police officer in New Rochelle appears to draw his gun and point it at a group of young men who, according to a YouTube video, were having a snowball fight — but police disagree.

New Rochelle Deputy Police Commissioner Anthony Murphy is calling the video a total misrepresentation of events, according to the New York Daily News.

“There was no snowball fight,” Murphy said.  He told the paper that officers were responding to a call of an armed male who pointing a gun at another person.  Multiple patrol cars rushed to the scene, where they watched as “one of the individuals bent down, adjusted something in his waistband and ran,” he said.

“Don’t (expletive) move, guys,” the officer says in the video, as one teen remains on his knees, hands up as the officer points his gun at him with both hands. The officer then pats him down as onlookers in the background watch.

The video was uploaded by an Instagram user with the name @wattsworld, and went viral after it was posted. 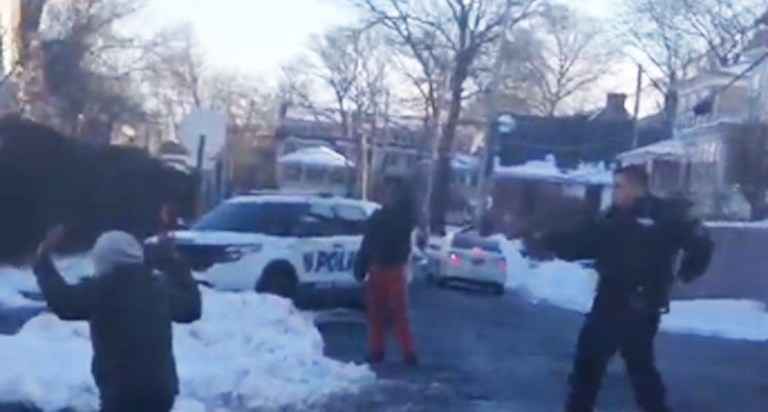 A New Rochelle police officer is seen drawing his gun at youths in a YouTube video. (Photo: YouTube)

“This group of guys was having a snowball fight,” the woman behind the camera says incredulously, “and now, the cop has a gun on them.”

Police, however, say the officer was holding the young men at the scene while his partner and others chased the suspect.

The officer is then seen telling the youths to get up and move along. He was investigating a 911 call reporting a gun, according to the Talk of the Sound.

New Rochelle officials have been raising the issue of proper police training in the midst of controversy on the deaths of Eric Garner and Michael Brown, the Talk of the Sound reported.

PIX11 News reached out to the New Rochelle Police Department for comment.