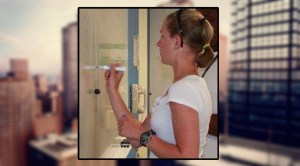 BAINBRIDGE ISLAND, Wash (PIX11) – A first-year science teacher at a Washington high school faces multiple charges after police say she tried to conceal a sexual relationship with one of her students.

Jessica Fuchs, 26, allegedly had sex with one of her 16-year-old male students, then tried to convince him to lie about the affair.

Citing court documents, KOMO News reports Fuchs’ husband found out what was happening when he came home to find his wife “involved in a sexual act” with the boy.

Fuchs allegedly exchanged graphic photos and videos with the 16-year-old, some via the app Snapchat, according to a probable cause affidavit obtained by KIRO 7.

Prosecutors say they have a sexually explicit video Fuchs allegedly made for him titled “For my baby.”

After investigating her online and cellphone activity, investigators say in her search history on the school laptop they found “how to permanently delete cellphone records.”  According to documents, she also sent the following text message to the 16-year-old:

“Well protect me as best you can. Remember NOTHING COMES OUT EVER! About anything, you have been to my house only once. Lie like you have NEVER lied before and try to get your mom to side with you completely and say this was all a misunderstanding!  And tell the investigator that!”

Fuchs, who faces charges of sexual misconduct with a minor and communicating with a minor for immoral purposes, now face an additional count of witness tampering after investigators found the text.

Students told the station they knew something serious was going on, but they didn’t know why Ms. Fuchs stopped showing up at school in February.  “All of a sudden one day she was gone and we were like ‘what happened?’” senior Sophie Martof told the station.

TRENTON, N.J. — Gas prices fell further in New Jersey but remained steady around the nation at large as an increase in total domestic gasoline stocks helped stem an increase in demand.

AAA Mid-Atlantic says the average price of a gallon of regular gas in New Jersey on Friday was $2.86, down four cents from a week ago.

NEW YORK (AP) — Amid mounting anger over allegations of bullying, Broadway and Hollywood producer Scott Rudin broke his silence Saturday, saying he is “profoundly sorry” and will step back from his theater work.

“After a period of reflection, I’ve made the decision to step back from active participation on our Broadway productions, effective immediately. My roles will be filled by others from the Broadway community and in a number of cases, from the roster of participants already in place on those shows," Rudin said in a statement.