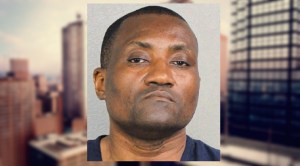 SUNRISE, Fla. — A self-proclaimed voodoo priest in South Florida was charged with sexual battery last month after allegedly raping an 11-year-old girl while claiming it was to “cleanse evil spirits.”

Police in the city of Sunrise revealed at a press conference Friday that Brogenet Cinor convinced a girl, who is now 16, and her mother that he has healing powers back in 2009.

According to the Sun-Sentinel,  Cinor told the girl and her mother he could feel evil spirits coming from the girl during a spiritual consultation. He then took her into a tiki-style backyard shed and had sex with her, police say.

After the incident, the girl told her mom, who confronted Cinor. However, the voodoo man threatened to curse the woman if she went to authorities.

“He was using the victims’ belief in voodoo and curses,”Sunrise police Officer Cindi McCue told the Sun-Sentinel. “They believed they could die if they didn’t follow his instructions.”

It was only years later, after the girl told her father about what happened during the “voodoo consultation,” that police learned of the alleged assault.

This isn’t the only time Cinor, who’s been practicing as a voodoo priest in the area for at least a decade, has used fear to coerce women into sex, police say.

Two years ago, two separate women told police they had sex with Cinor after he told them they needed a spiritual cleansing. One of the women, who said Cinor told her she would die if she didn’t have sex with him, became pregnant.

She said Cinor later gave her $500 to get an abortion.

Prosecutors did not pursue charges in either case.

In the case of the young girl, Cinor was arrested June 19 and charged with sexual battery on a child less than 12 years of age. He was released the following day on $75,000 bond.

BUSHWICK, Brooklyn --- An attacker shoved a man off the platform in a Brooklyn subway station, breaking the man's leg, police said Sunday.

The 52-year-old victim was on the platform inside the Bushwick Avenue/Aberdeen Street Station on Saturday when a man demanded his property around 4:15 a.m., officials said. The victim resisted and the two struggled.

He and his wife headed to Newington, Connecticut, during the pandemic to realize a dream: Opening a toy store everyone could enjoy.

(WJW) – A lawsuit filed against Kellogg's claims the way the company markets its strawberry Pop-Tarts is misleading.

Plane from NY to LA makes emergency landing in Wisconsin

What Americans fear most, according to their Google searches

Gas prices are rising: These 10 easy driving tips will save you money

What U.S. cities will look like with sea level rise, according to scientific projections