ROANOKE, Virginia – Video apparently filmed by the gunman showing the double-fatal shooting of a WDBJ-TV reporter and photographer was posted to both a Twitter and Facebook account under the name Bryce Williams, shortly after the killings.

Wednesday morning, reporter Alison Parker and photographer Adam Ward were reporting a feature story when a gunman approached the news crew and opened fire during an interview, killing both employees and seriously wounding the person being interviewed, Vicki Gardner, executive director of the Smith Mountain Lake Regional Chamber of Commerce.

Police identified a former reporter from WDBJ-TV, Vester Lee Flanagan, whose on-air name is Bryce Williams, as a suspect in the killings.

When officers arrived at the scene, Flanagan was nowhere to be found but was spotted hours later by a state police officer’s license plate reader, officials said. He led police on a chase that ended in a crash. An officer approached the vehicle to find Flanagan suffering from a self-inflicted gunshot wound that ultimately killed him.

New posts, including those that included video of the journalists’ final moments, were published as police chased the suspect.

The videos of the shooting, taken from the gunman’s perspective, were posted on social media under accounts belonging to Bryce Williams. The first video shows the gunman standing behind the videographer and watching the interview for 20 to 30 seconds before raising the gun.  In the second video, he opens fire as Parker screams and tries to run before falling to the ground. 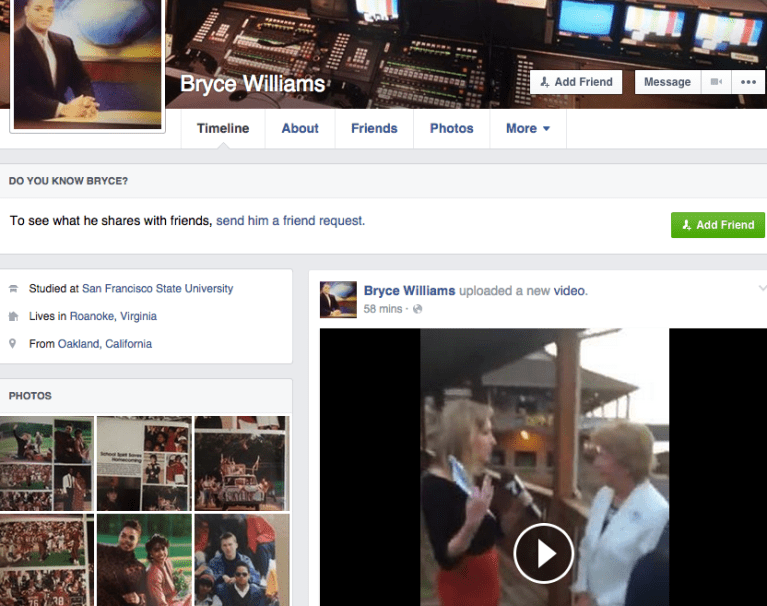 Both accounts were suspended minutes after the graphic video appeared.

On the Twitter account, the user posted the following on the morning of the shootings, “Alison made racist comments,” and “Adam went to hr after working with me one time!!!”

ABC News also received a 23-page document that was faxed to them overnight by someone named Bryce Williams, the outlet tweeted.  In the manifesto, the author calls himself a “human powder keg” and rants about engaging in a race war following the Charleston church shooting as well as his respect for other mass shooters, among other topics.  The document was turned over to police. 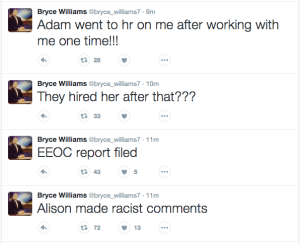 Bryce William’s reporter reel was also uploaded to the Facebook page.  He was fired from WDBJ-TV in 2013 and had to be escorted by security from the station.