The disturbing footage was posted on ISIS’ official al Furqan media site, but has not been independently verified.

According to reports from Jordan’s state TV, the 26-year-old pilot was killed a month ago, on January 3rd.

“Should, in fact, this video be authentic, it’s just one more indication of the viciousness and barbarity of this organization,” U.S. President Barack Obama said in response to the video. “And it I think will redouble the vigilance and determination on the part of our global coalition to make sure they are degraded and ultimately defeated.”

Relatives and friends were holding out hope after his fate was not mentioned during a recent video featuring Japanese journalist Kenji Goto, the latest prisoner purportedly decapitated on video.

ISIS had demanded Japan pay them $200 million in ransom.

Militants captured Al-Kaseasbeh after his F-16 crashed in Syria, near Raqqa, in December. 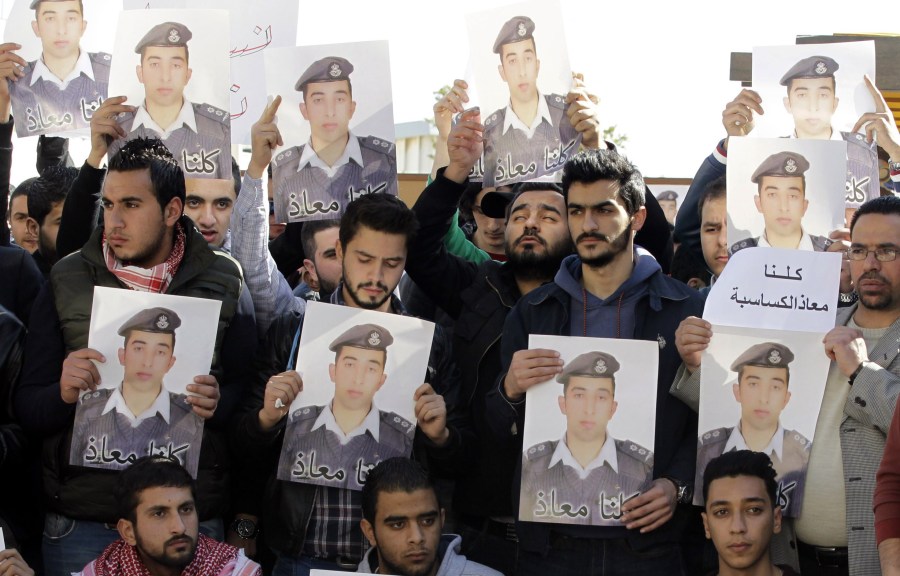 Activists carry posters with a portrait of the Jordanian pilot Maaz al-Kassasbeh, who was captured by Islamic State (IS) group militants on December 24 after his F-16 jet crashed while on a mission against the jihadists over northern Syria, during a rally calling for the release of Al-Kassasbeh in the Jordanian capital Amman on February 3, 2015. Jordan vowed to do all it could to save the pilot held by IS after the jihadists killed a Japanese journalist they had been holding. IS has been demanding the release of an Iraqi jihadist on death row in Jordan in exchange for Kassasbeh’s life, and Amman said it would hand her over if given proof that he is still alive. (KHALIL MAZRAAWI/AFP/Getty Images)

Jordan had been working with ISIS to secure the release of al Kaseasbeh, and recently demanded proof of life before trading al-Qaida prisoner Sajida al-Rishawi.

Al-Rishawi was apprehended during a suicide bomb attack in 2005 at a Jordanian hotel after her explosive device failed to detonate.