FLUSHING, Queens — Three people are dead and 16 others are injured, including multiple in critical condition, after a “very serious” collision involving two buses, which sent one into a building that later caught fire in Flushing Monday morning.

“We’ve had a really tragic morning here in Flushing, Queens. Just shocking – you see the scene over there,” Mayor Bill de Blasio said a news conference. “Hard to compare to anything I’ve ever seen – the sheer destruction from the impact of this collision.”

A city bus and private charter bus collided at Main Street and Northern Boulevard, causing one of the buses to crash into a building, according to police. The crash occurred at about 6:18 a.m., FDNY said.

The driver of the charter bus, operated by Dahlia Group Inc., a pedestrian and a passenger aboard the MTA bus died, a police official said at a morning news conference.

The driver of the MTA bus, who has worked for 10 years, is among 16 people hospitalized, officials said.

Several people were critically injured in the crash, with officials saying seven were critical before two were pronounced dead at the hospital. It is unclear how many are in critical condition, but the MTA driver is not one of them, according to Joe Lhota, chairman of the Metropolitan Transportation Authority.

“It’s a sad day when three fellow New Yorkers perish while they’re getting to work,” Lhota said at a news conference.

The crash was immediately deemed “very serious” by the NYPD, which tweeted about the incident at 6:26 a.m., about 10 minutes after it occurred.

The mayor offered his sympathies and prayers to the victims at the morning news conference, alongside Lhota and first responders, and Gov. Andrew Cuomo later tweeted about the incident.

“My deepest sympathies to those harmed by this morning’s horrific bus crash in Queens and grateful for the work of our first responders,” Cuomo said.

The Dahlia bus was traveling east on Northern Boulevard when the MTA bus, headed north on Main Street, attempted to turn right onto Northern, officials said.

It is not clear who, if anyone, if as fault, de Blasio said.

Speed, however, appears to be a factor, according to Lhota.

“These buses spun around, that requires an enormous amount of speed,” Lhota said.

One bus — apparently the Dahlia, from pictures on scene — crashed into a building housing restaurants and retail spaces. A pedestrian was pinned and died on scene, police said.

A fire broke out inside the building, FDNY tweeted. Firefighters have since extinguished the flames.

The crash had a “substantial” impact on the building, and officials are working to determine how badly it was damaged, de Blasio said.

A slew of buses in Queens faced delays after the crash.

As of 11 a.m., the following changes are in effect: 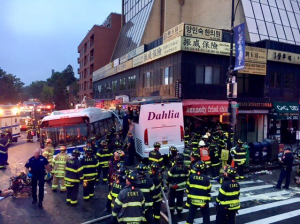