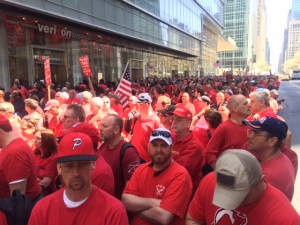 MANHATTAN – Thousands of Verizon workers are rallying in Manhattan Monday, marching through city streets as they endeavor to save middle class jobs and demand higher wages.

They say they are “frustrated by Verizon’s failure to live up to its commitment to roll out FiOS in New York” and “unwillingness to settle a contract that saves middle class jobs for nearly 40,000 workers.”

Some 8,000 marchers were participating in the rally. The demonstration began at Verizon at 230 West 36th St. and is set to march toward Verizon Wireless at 125 West 42nd St.