NEW YORK — Hundreds of children who were being sexually exploited have been rescued from their “nightmare” as part of a week-long, nationwide operation meant to “end the scourge” of sex trafficking in the U.S., according to the FBI.

More than 150 suspected pimps were arrested in the sting, the ninth and largest enforcement of its kind so far, the agency said. The children — 149 in all — were plucked from hotels, casinos and truck stops, among other locations, federal officials said. The youngest was 12 years old.

Investigators said they tracked down some of the culprits by scouring ads posted on Backpage.com then setting up meetings — recorded by hidden cameras — between the pimps, children and undercover agents.

“When kids are treated as a commodity in seedy hotels and on dark roadsides, we must rescue them from their nightmare and severely punish those responsible for that horror,” FBI director James Comey said in a statement. “We simply must continue to work with our partners to end the scourge of sex trafficking in our country.”

After the children were found, crisis intervention specialists were provided for them as well as “resources for basic needs such as food, clothing, shelter, and medical attention,” the FBI said.

Executed in 135 cities and involving more than 500 law enforcement officials, the sting has been dubbed Operation Cross Country and is part of the FBI’s Innocence Lost National Initiative.

This is the ninth operation of its kind, the agency said. The first one was carried out in 2003. To date it has identified and recovered about 4,800 sexually exploited children and led to the convictions of more than 2,000 pimps and others associated with trafficking crimes, according to the FBI. 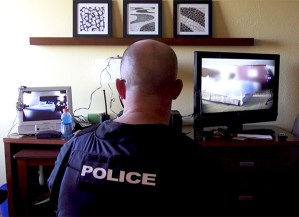 An officer with the Alexandria (Virginia) Police Department monitors an undercover sting operation in a hotel room during Operation Cross Country. (Photo: FBI)