(CNN) — Two 12-year-old girls inspired by Internet horror stories lured a girl of the same age into a wooded area near Milwaukee before one of them stabbed the victim 19 times and left her to crawl to her rescue over the weekend, police said Monday.

The victim, a 12-year-old friend of the suspects, was in stable condition at a hospital Monday, two days after a bicyclist found her on along a road in Waukesha, city Police Chief Russell Jack said.

The suspects were arrested hours after the girl was found Saturday, and they were being held Monday on preliminary charges of attempted first-degree intentional homicide. No names were released.

The girls attended the same middle school and had a sleepover at the home of one of the suspects Friday night, Jack said.

“Both suspects had a fascination with a fictitious character that often posted” to websites dealing with stories about death and horror, Jack told reporters at a news conference. 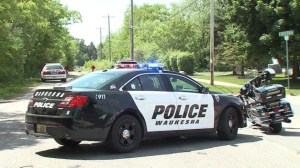 “Based on our investigation, it is believed that the suspects had planned to kill the victim for several months,” Jack said.

Investigators believe the suspects lured the third girl, on the pretext of playing a game, into a park on the morning after the sleepover, the police chief said.

“Once there, one suspect held the victim down while the other suspect stabbed her 19 times — in the arms, legs and torso,” Jack said.

Some of the girl’s major organs were struck, but she survived.

After the suspects left, the victim crawled out of the woods and onto a road, where the bicyclist found her, Jack said.

Jack didn’t say whether the victim had said anything to the bicyclist or police. But authorities searched for the two other girls, and a sheriff’s officer found them walking near Interstate 94, Jack said.

He declined to say whether the suspects had blood on their clothes, but said: “There was evidence that was readily apparent when the two were taken into custody.”

Details that police released about the Internet character, or the person writing as the character, were sketchy. He didn’t name the persona or the sites.

“It’s not one specific site that this character accesses or communicates with children on,” he said.

Jack said he expected the suspects to be charged as adults on Monday afternoon.

But the city of Rochester and the officers could still be held accountable.

Authorities on a police ship heard a mayday call for a sinking boat at around 11:20 a.m. Within minutes, they located a partially submerged recreational boat with three men on board about a half mile north of Crab Meadow Beach in Huntington.