HOBOKEN, N.J. — A commuter standing on the platform was struck by flying debris and killed while 114 others were hurt Thursday when a New Jersey Transit train crashed into a station in Hoboken during the height of the morning rush-hour commute, New Jersey Gov. Chris Christie said at an afternoon news conference.

The train, which usually carries about 250 riders, was coming from Spring Valley, New York, on the Pascack Valley Line. It was due at the historic station at 8:38 a.m., NJ Transit spokeswoman Jennifer Nelson said. It crashed shortly before 9 a.m.

A woman standing on the platform when the train came barreling through the station was hit by flying debris and died from her injuries. She has been identified as Fabiola Bittar de Kroon, 34, of Hoboken, according to the New Jersey State Medical Examiner’s Office.

Among those critically injured is the train’s engineer, Christie said. That engineer has been identified as Thomas Gallagher. An NTSB official said Gallagher has been released from the hospital as of 5:45 p.m. and will be questioned by federal investigators.

The packed, fast-moving train didn’t seem to slow when approaching the station, said Jamie Weatherhead, a commuter inside the train.

“There were people in front of me that just toppled over … they were trapped. They couldn’t get out,” she said. “The conductor was completely bloody.”

Both Christie and New York Gov. Andrew Cuomo said it’s too early to tell what caused the crash and urged the public not to “speculate,” but said what is known for sure is that the train entered the station at a “high rate of speed.”

The speed limit coming into the station is 10 mph, Bella Dinh-Zarr, vice chairman of the NTSB, said. It’s not yet known how fast the train was traveling.

Initial fears were that something sinister occurred to cause the crash, a vehicle inspector who was in the station at the time said.

“It was frightening. In this day and age, you think it’s a bomb,” he said. “People were buried under the rocks.”

But as of Thursday afternoon, there was nothing to indicate the crash was “anything but a tragic accident,” Christie said.

The federal National Transportation Safety Board has launched an investigation into the cause of the crash. Officials arrived at the scene Thursday evening.

Dinh-Zarr said water is leaking onto the site of the crash, sparking concern about the terminal’s structural integrity. Because of the terminal’s age, asbestos is also a concern as the carcinogenic material, used as insulation, may have been released into the air when the walls and ceiling shattered in the crash.

She urged anyone with “relevant information” to email witness@ntsb.gov.

The investigation will include a look at similarities between Thursday’s deadly incident and another crash at the same station on Mother’s Day in 2011, NTSB officials said.

“We always look at past history and every other factor,” an NTSB official said.

In the 2011 incident, 34 people were injured when a PATH train slammed into a bumper at the end of a track, NJ.com reports. 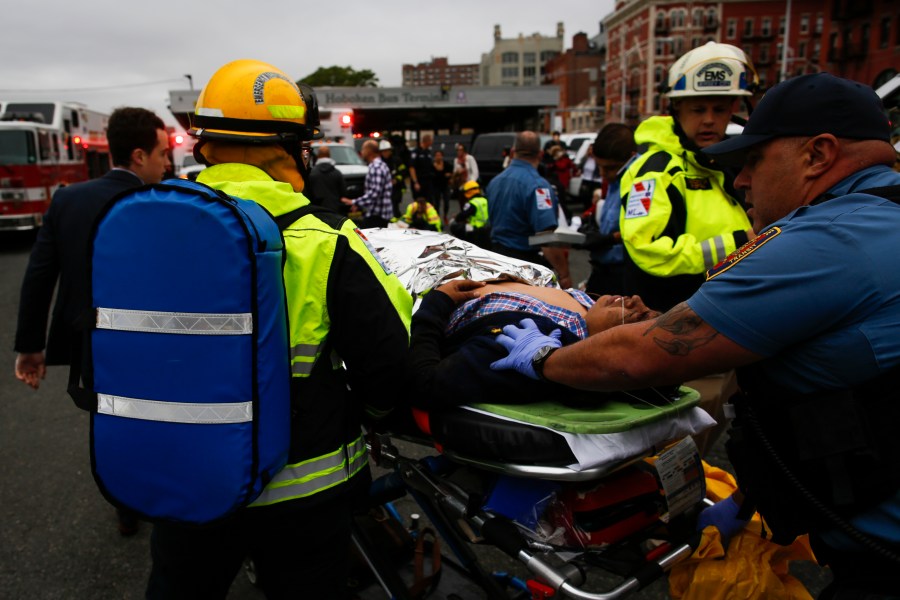 The crash happened during the morning rush-hour commute at one of the busiest transit stations in New Jersey. Within minutes, dramatic photos and first-hand accounts flooded social media.

Images from the scene showed heavy damage to the 109-year-old station, which in 1973 was added to the U.S. National Register of Historic Places. The train blew through barriers and took out part of the ceiling and support beams, coming to a stop at the wall leading into the terminal’s reception area, Christie said.

Commuters are advised to avoid the area, Nelson said.

“There’s heavy structural damage to the terminal,” she said. “It’s not safe to go in there right now.”

Passenger Leon Offengenden told CNN he was in one of the sections behind the lead car when the crash happened.

“The front car is essentially off the rails … into the building of the station, with the roof sort of collapsed around it,” he said. “The lights went out and a few people screamed.”

Once outside the train, “a man walked past me holding his arm. I saw some blood,” Offengenden said.

About 40 patients were transported to Jersey City Medical Center, including 11 who are in the emergency department. Multiple people are considered critically injured.

“The walking wounded,” many of whom were taken to the hospital on an NJ Transit bus, are being treated in the hospital’s cafeteria and are expected to be discharged soon, an official said. It’s a set-up that mirrors how the same hospital responded when Flight 1549, famously piloted by Chesley “Sully” Sullenberger, landed on the Hudson River.

Other patients at Jersey City Medical Center have been discharged and sent to area nursing homes to open up beds for crash victims.

Four patients were taken to Hoboken University Medical Center, and “many more” were transported to other nearby hospitals, an official said.

Most of those injured were on the train at the time of the crash, Christie said.

Hoboken City Mayor Dawn Zimmer offered the following statement: “My thoughts and prayers are with everyone affected. Thank you for the outpouring of support and to all the first responders on scene.”

Some cities repel rain, while others attract it: …

Rents in NYC and other US cities are spiking

Some cities repel rain, while others attract it: …

Rents in NYC and other US cities are spiking

Study: The most popular dog name in each state

NYC dining hall offers the world on a plate

Party ends with 4 shot in Queens

Study: The most popular dog name in each state