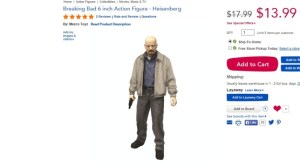 A Florida mom started a petition against “Breaking Bad” dolls sold in Toys R Us. (Toys R Us)

NEW YORK (PIX11/AP) — Toys R Us is pulling its collectible dolls based on the characters of AMC’s hit series “Breaking Bad” after taking heat from a Florida mom who launched a petition campaign last week.

The dolls are based on the series about a high school chemistry teacher who turns into a crystal meth dealer. Susan Schrijver called the dolls violent and “unsuitable to be sold alongside Barbie dolls and Disney characters” in her Change.org petition.

“Parents and grandparents around the world shop at Toys R Us, online and in stories [sic] with their children and should not be forced to explain why a certain toy comes with a bag of highly dangerous and illegal drugs or why someone who sells those drugs deserves to be made into an action figure,” the Florida mom wrote in her statement.

Toys R Us told The Associated Press late Tuesday that the dolls are being removed on its website and shelves and are taking an “indefinite sabbatical.” The retailer has maintained that the dolls are sold in limited quantities in the adult action figure area of its stores.

Schrijver thanked her 9,300 petition signers Wednesday for their support. “Just remembr [sic], that if you believe in something, go for it!” she wrote.

PARIS (WJZY) — After 93 years of entertaining the world alongside her sweetheart Mickey, Minnie Mouse is ditching her iconic dress and going for something more modern.

In honor of the 30th anniversary of Disneyland Paris, which falls on Women's History Month in March, the character will unveil her fresh look designed by Stella McCartney, daughter of singer-songwriter Paul McCartney.