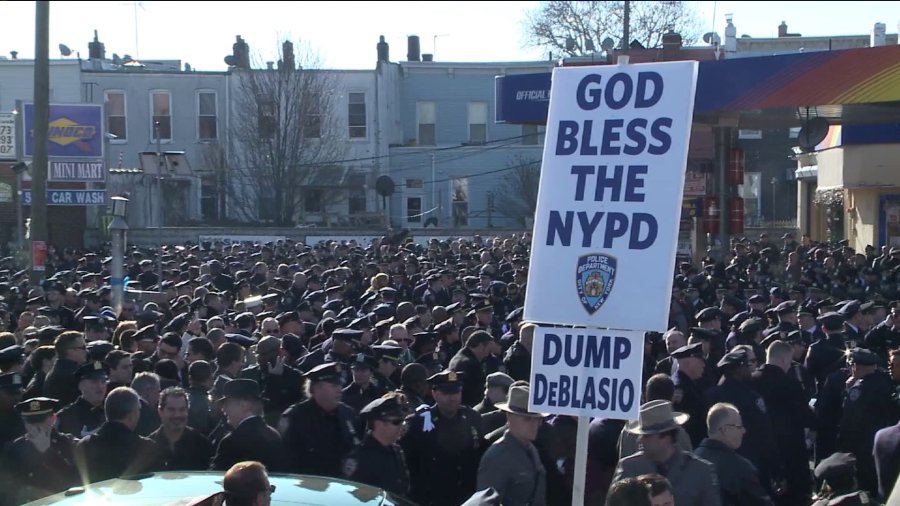 GLENDALE, Queens (PIX11) — Thousands of police officers turned their backs to an outdoor screen showing Mayor Bill de Blasio as he spoke at the funeral of Officer Rafael Ramos who was killed last week in Brooklyn.

The funeral at Christ Tabernacle in Glendale, Queens, was broadcast to thousands of police who gathered outside.

Before the funeral started, one officer held a sign that read “God bless the NYPD. Dump de Blasio” as the mayor entered the church for the funeral.

In the mayor’s speech, De Blasio directed his remarks to the Ramos family, but also said he wanted to “extend my condolences to another family — the family of the NYPD — that is hurting so deeply right now.”

Police officers also turned their backs on Mayor de Blasio last week as he walked into the police press conference about the two NYPD officers shot and killed execution-style in Brooklyn.

Thousands of cops turn their backs away from @deBlasioNYC as he eulogizes #NYPD Ofcr. Rafael Ramos. pic.twitter.com/bXNU6z23rD

This sign saying “Dump @deBlasioNYC” was along the passageway the mayor walked to get into the #NYPD funeral. pic.twitter.com/0SmsCS76WL