NEW YORK (PIX11) — A credit-card reader and camera have been discovered on a MetroCard vending machine at Columbus Circle, the MTA announced Thursday.

The MTA says an unidentified customer noticed the device on the north end of the southbound 1 train at Columbus Circle on Wednesday evening. According to reports, the customer removed the device and gave it to a station agent. The NYPD is investigating. 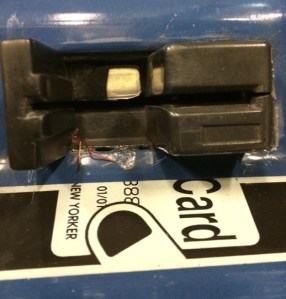 New York City Transit is urging customers who used machines at Columbus Circle “to immediately check with their bank or credit card company to determine if their accounts show any signs of unauthorized activity.”

“We have already dispatched personnel to check all MVMs system-wide today for other devices,” said MTA New York City Transit President Carmen Bianco. “As was the case yesterday, we continue to ask our customers ‘If You See Something, Say Something,’ particularly if they notice any suspicious activity or device in our system.”

On Tuesday, MTA police announced they were also looking for a suspect after a camera and credit-card reading device was discovered at an LIRR ticket machine.

Officers approached him but he got away. The MTA does not believe the suspect obtained any information.

On November, 4 suspects were arrested and charged after dozens of similar devices were discovered throughout the LIRR and Metro-North system.

The MTA is reminding customers to take a close look at the vending machines, and also to shield the keypad when using a credit or debit card.

INDIANAPOLIS (NewsNation Now) — The names of the eight victims killed in Thursday's mass shooting at an Indianapolis FedEx facility were released Friday evening.

Indianapolis Police Deputy Chief Craig McCartt said four of the victims were killed outside the building and another four inside while many employees were on a shift change or dinner break. At least five more victims were taken to the hospital for wounds from the shooting.

JAMAICA, Queens --- The title of NYPD chief of department may be new, but for Rodney Harrison, it's a continuation of a job he's been at for 29 years.

In his first one-on-one with PIX11 News since taking the position, he told us he's starting his new job by strengthening policies and practices.

MANHATTAN --- The COVID-19 pandemic has changed the world.

For the past 13 months, much of what we do is framed by it.

How we talk. What we talk about. And how we act.

"I don't think I used the word 'quarantine' one time until this whole sort of COVID situation emerged," New Yorker Alex Libman said.

Scam Alert: Do not answer calls from these area codes