Hal Roach’s biggest talent was in finding talent. His first big star Harold Lloyd rose through the ranks of early Hollywood, with both men working as extras in the silents.

On the strength of an inheritance, Roach founded his own studio to produce one-reel comedies. One day, in the early 1920s, while in his office, he heard a ruckus outside. He looked out the window and saw kids playing, becoming the idea for his series of “Our Gang” shorts which gave us stars such as Spanky, Stymie, Farina, Jackie Cooper, Alfalfa, Buckwheat, Darla Hood and Dickie Moore.

Through a twist of events two contractees would be teamed by the studio in 1927 — Stan Laurel and Oliver Hardy!

The team got along famously, with Stan being a big part of their behind-the-scenes success, helping craft the team’s films and writing some of their best material.

Roach had left Pathe films and joined powerhouse MGM in the late 1920s. MGM didn’t need feature films from Roach, but Roach felt he needed to get into the feature market and his successful stars Laurel and Hardy made that happen.

Their films were always received with delight by fans but critics rarely got their humor, except when they got a chance to see a film released by the team on Dec. 30, 1934. The film was “Babes In Toyland,” perhaps the team’s best best- known film today!

One of the team’s biggest success was the 1933 film, “Fra Diavolo,” based on the operetta of the same name.

While back east in New York discussing his 1934 film production schedule with MGM execs, Roach purchased the rights to the 1903 Victor Herbert operetta “Babes In Toyland” from RKO.

Roach knew the operetta would need a new story line to make it to the screen and he intended to use stars on the lot such as Spanky McFarland to bill it as an “All Star” release, a format he used in a series of shorts.

By the time his train arrived back in Hollywood, he had written a story he thought Laurel would go nuts over. Only problem was Laurel turned out not so nuts about it, even stating, according to Roach, something like this “we can’t make this we don’t wear our derbys.” Roach did not buy that because the team did NOT wear the derbys in “Fra Diavolo.”

Roach’s studio was turned into a Mother Goose Land of wonder and excitement with wonderful sets helping to push the film’s cost to nearly $430,000. Roach got so fed up with Laurel’s not liking his story he told Stan to go ahead and make the film. 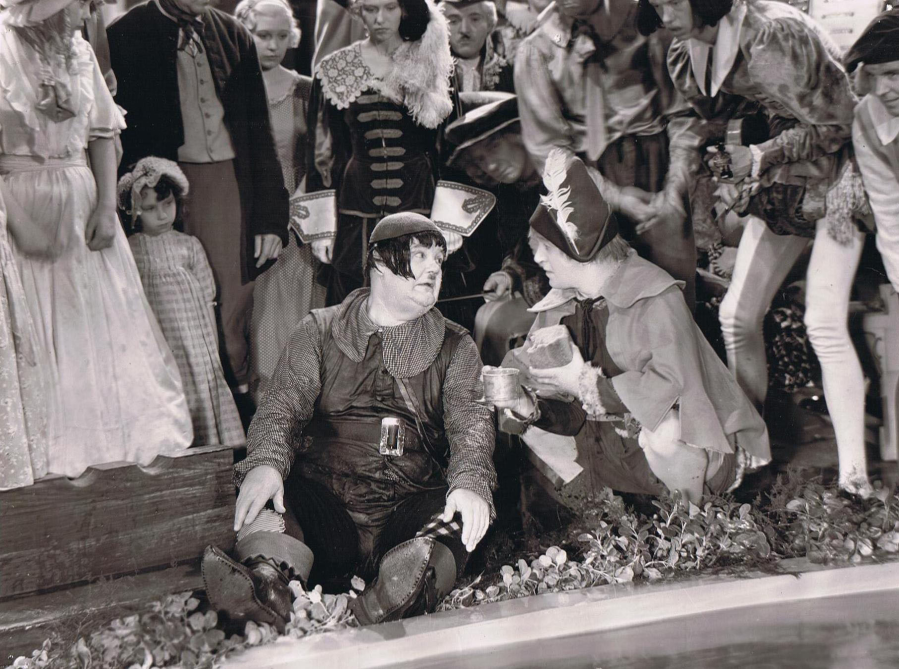 Laurel and his writers came up with the film’s simple story, which young and old could understand.

Roach hired 21-year-old Henry Kleinbach (Henry Brandon) for the role of Silas Barnaby after seeing him in a play one night. When young Brandon showed up at his studio, Roach said, “You’re not the old S.O.B I saw last night!” Roach hired a makeup man from Paramount to turn Brandon into the evil old Barnaby. He was only 22 when the movie hit theaters.

Brandon said later in life that it was a good thing he was young at the time — if they had hired an old actor, the rough filming would have killed him.

Walt Disney, a huge fan of the team, gladly okayed the inclusion of his star Mickey Mouse in the film (played by a monkey) and the Disney studio’s big hit song “Who’s Afraid Of The Big Bad Wolf?”

The dunking pond in the film became the prank behind the scenes for the crew. All were fair game for a dunking except Brandon, because it would take too much time to redo his makeup.

Stan, though, was hit with a lawsuit, with an extra claiming he was injured when Laurel pushed him into the pool. There were more issues:  After changes in directors, a change in actresses playing Mother Peep; Stan falling off a platform, tearing ligaments; the actor playing Old King Cole had ruptured stomach muscles from having to laugh for days for the camera; and Ollie going to the hospital when the film wrapped to get his tonsils removed.

Despite the agony of making it, the film turned out fantastic, and was rated as one of the most successful fantasy films of the era.

In fact, the film garnered the best reviews the team had received.

Stan and Ollie went on to other successful films, but Charlotte Henry (Bo Beep) and Felix Knight (Tom Tom) would see the film be their biggest film success. Perhaps the biggest success was Henry Brandon, who went on to many other roles, including reprising the role of Barnaby (named in the script) in “The Our Gang Follies Of 1938” and his outstanding role of Chief “Scar” in John Ford’s “The Searchers.” (1956)

Hal Roach was almost the only one that never became a fan of the film.

He would always maintain his story could have been the biggest hit in the business and would always state the film did not even make back its cost.

The film brought in nearly $945,000 between U.S. and foreign box office, but showed a profit of only $13,853.24. It also ruined the relationship between Roach and Laurel, saying that after “Babes,” he was done making Laurel and Hardy movies, leaving Stan and his team to creating them.

But what Roach never realized was his biggest success was bringing together Laurel and Hardy.

As the 1930s came to a close, Roach had a few more notable successes, such as “Topper,” “One Million B.C.” and “Of Mice and Men,” but his lasting legacy are the films known as “The Little Rascals” (Our Gang) and the films of Laurel and Hardy with “Babes In Toyland” still getting annual airings during the holiday Season. Stan’s only regret was the film was not produced in color. Disney had Three Strip Technicolor locked up for his cartoons at the time, and it was also too expensive to use — “Becky Sharp” (1935) would be the first big film using the process.

Roach retained “Babes In Toyland” until the late 1940s, and in the early 1950s, it received its reissue under its best known title, “March Of The Wooden Soldiers.”

The earliest television airing we can find today is Dec. 30, 1952 on WPIX. The film became a WPIX Thanksgiving tradition in 1963 and is actually owned by WPIX and parent company Tribune.

The film was colorized in 1991, which kept it a viable TV property, because at that time execs thought no one would watch old back-and-white films, TCM changed all that proving fans of all ages knew black and white films could be stunning to watch when made by film geniuses.

This year, thanks to WPIX’s Rolando Pujol and Tribune’s Jessica Bellucci and their team, we will all get the treat of seeing this classic film as originally titled “Babes In Toyland” and in a stunning black and white print.

NY-3: the battle for Queens and Nassau County