NEW YORK — Before he successfully pulled off one of the most daring prison escapes in New York State history, convicted cop killer, David Sweat, was able to work in the underground tunnels of the Clinton Correctional Facility for about 85 nights — with no one apparently noticing.

Sweat repeatedly left his cell in the prison’s “honor block” for hours, updating his accomplice in the next cell, Richard Matt, about his progress.

By late Friday, June 5, 2015, Sweat was ready to break out of Clinton with Matt, another convicted killer.

This is just one of the stunning findings in a 150-page report released by the New York State Inspector General, Catherine Leahy Scott, on Monday—the one-year anniversary of the great escape.

The report notes the two convicted killers spent more than three months getting their escape plans in order, using smuggled tools to cut open the back of their respective cell walls, which gave them access to a catwalk that took them into the subterranean levels of the prison.

Sweat did the lion’s share of the labor, but Matt was able to set the wheels in motion, by sweet-talking the prison seamstress, Joyce Mitchell, who had a previous sexual relationship with David Sweat, according to the IG’s report.

The report reveals the married Mitchell was professing her love for Sweat in notes she secretly sent him, even as she engaged in “numerous sexual encounters with Matt in the tailor shop. These included kissing, genital fondling, and oral sex.”

Mitchell ultimately admitted that she smuggled in hacksaw blades to the prison and that some tools were hidden in hamburger meat, which a Corrections Officer, Gene Palmer, said he unwittingly transported to Richard Matt’s cell.

The inmates were allowed to cook in their cells, because they were housed in the honor block.

Richard Matt had won the trust of Palmer, who accepted some of Matt’s paintings as gifts.

The Inspector General’s report features photos of some of Matt’s artwork.

One of them is an image of TV mob boss, Tony Soprano—played by the late James Gandolfini.

The painting shows Tony Soprano in a suit, holding a cigar, and it’s dated 6-5-15—the date of Matt’s exit from his cell.
Its caption reads, “Time to go, kid.”

The lengthy report gives a blow-by-blow account of Sweat’s obstacles, as he sought to successfully escape from the prison.

The prison’s main wall was the biggest problem, but in early May 2015, Sweat learned the steam generating plant had shut down the prison’s heating system for the season.

Sweat realized he could cut holes in the now cooled, 18-inch, diameter steam pipe that passed through the main prison wall.

There was a tunnel that connected the prison to the steam plant.

Sweat then found a manhole cover secured with a chain and lock on the morning of June 5, 2015.

He was able to cut the chain and lift the manhole cover, confirming it lead to a village street in Dannemora, New York.

Corrections officers did not discover that Matt and Sweat were missing until 5:17 a.m. the morning of Saturday, June 6, 2015.

Sweat had fashioned a dummy to put in his bed; a photo of this is included in the Inspector General’s report. 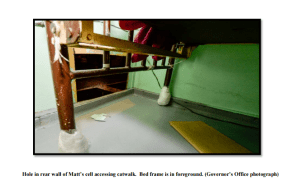 Sweat and Matt expected that Joyce Mitchell would be their getaway driver to start them on a long journey to Mexico.

But Mitchell panicked and didn’t show, so the men ran on foot, hoping to make their way to the Canadian border.

David Sweat told investigators that Mitchell had schemed with Richard Matt to murder her husband, Lyle, another prison employee.

Matt gave Mitchell several narcotic painkiller pills that were supposed to knock Mitchell’s husband out, when she went to leave the house to pick up the escapees.

But Mitchell got cold feet and didn’t show up at the rendezvous point.

20 days into the manhunt, a border patrol team fatally shot Richard Matt in the town of Malone, New York. His lower extremities were filled with bug bites.

Two days later, on June 28, 2015, Sweat was shot by a sharp-eyed State Police Sergeant, jogging just a mile and a half from the Canadian border.
Sweat—who turned 35 years old while on the lam—survived—and gave up many details to investigators about the escape planning.

He spends 23 hours a day in his cell—and gets one hour outside on his own.

He’s not allowed to receive packages but can get letters.

Sweat was already doing life in prison, with no chance of parole, when he planned the escape.

He was convicted in the 2002 fatal shooting of Broome County Sheriff’s Deputy, Richard Tarsia—even running over Tarsia after shooting him.

Tarsia had come upon Sweat and accomplices, after they robbed a fireworks supply store.

These included the failure by officers assigned to the prison’s front gate to search employees’ bags entering the prison, as required.

Night counts of inmates were conducted negligently or not at all, according to the report.

“The extent of complacency and failure to adhere to the most basic security standards uncovered by my investigation was egregious and inexcusable,” Inspector General Leahy Scott wrote.

“These systemic deficiencies led to the escape of two, convicted murderers, striking fear in communities and placing brave law enforcement personnel at risk, at a high cost to the state.”

Up to 1,300 local, state and federal law enforcement officials joined in the search for the killers.

Patrick Bailey, spokesperson for the Department of Corrections and Community Services, issued a statement to PIX11, after the Inspector General’s report was released.

“Since last June, DOCCS has instituted a number of reforms to strengthen operations at Clinton Correctional Facility, including installing new cameras and security gates, retraining staff, disciplining responsible employees, appointing a new superintendent, and replacing other senior administrative personnel. We are reviewing the Inspector General’s findings and will work with her office to implement her recommendations to improve operations at Clinton and throughout the entire system, and help ensure this incident is never repeated.”

Governor Andrew Cuomo, who left the Belmont Stakes on June 6, 2015 to respond to the emergency in Dannemora, New York, told PIX11 that he had talked to a veteran Corrections Officer who’d worked at Clinton for twenty years, who essentially said, “So, when you show up for work at night, and there’s never been an escape, maybe you’re a little complacent,” the Governor paraphrased. “That’s gone. That’s changed,” the Governor said.

“There was a labrynth of pipes and vents and hallways in the back area” of the prison, the Governor noted. “Those have all been blocked off.”

“We took it as a learning experience,” Governor Cuomo told PIX11, “even though it was the first time, and the prison is a better prison for it.”