SOUND BEACH, Long Island (PIX11) – A diner inspired by the pay-it-forward movement created by a former teacher who lost his 22-month-old child in a tragic accident, left a waitress $3,000 as a tip, asking only that the kindness be passed on to someone else in the future. 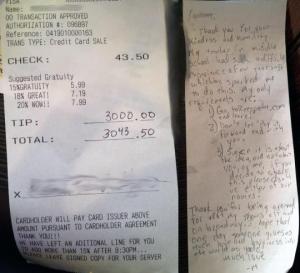 The whopping 6800% tip was left with a detailed note written on the back. (ReesSpechtLife.com)

The diner, who wishes to remain anonymous, left the 6800 percent tip on his $43.50 tab at a Times Square restaurant with the following message scrawled on the back of the receipt:

“Thank you for your kindness and humility.  My teacher in middle school had such a difficult experience a few years ago which has sparked me to do this.  My only requirements are:

1.) Go to ReesSpechtLife.com and learn!

3.) Since it’s about the idea and not about you, or me, if you decide to share this, don’t use either or our names!

Thank you for being around for all of my shows on and off Broadway.  I hope that someday someone gives as much love and happiness into the world as you do. 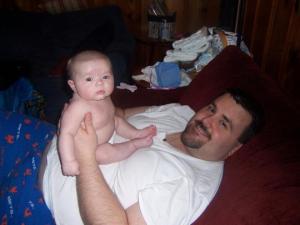 Specht says he started the (ReesSpechtLife.com)

The middle school teacher mentioned in the note is Richard Specht, and the difficult experience his student was referring to was the drowning death of Specht’s son, Rees, who fell into a backyard pond as the family prepared the house for Sandy in October, 2012.

Specht learned about the tip when the waitress reached out to him:

“I saw the $3000 tip and it didn’t register at first because you know people share acts of kindness with us from all over,” Specht told PIX11 News, describing the email he received from the unidentified waitress. 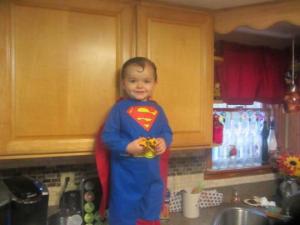 “This young man used to come up to my room to talk with me and I remember many of our conversations that we had over the course of that year . . . to think that someone I had a decade ago would honor my little boy or even remember his 8th grade science teacher in such a way blows me away.”

Specht won’t identify the student, who was not only a former student of the 8th grade science teacher but a rising Broadway star. His identity remains anonymous for good reason.

“Both the student who I am in contact with, as well as the waitress, wanted it to be about the act of kindness and what we’re trying to promote and I am just humbled by that,” he said.

Specht says he reached out to his former student on Facebook to thank him, and told him he couldn’t believe it.  He also told him, “‘The single most important thing you did was put a smile on my wife’s face.  When you lose a child you always carry that pain, and she had that smile that I want to see all the time. I was just so happy to see it.”

Specht says he’s touched that his story had an impact on the student and hopes the “paying-it-forward” movement which honors his late son Rees continues.

“He only had 22 months and everyone wants to make a difference in the world and we felt like he didn’t have his chance. And we wanted to give him that chance to pay back the kindness we received after he passed away.”

After losing their son, the Spechts, who have three other children, decided to create “ReesSpecht Life,” a memorial scholarship with the primary goal to “remind people the importance of Community, Compassion and Respect.”

In a 2013 interview with PIX11, Specht talked about the inspiration that was borne of heartache, “We decided we were going to pay it forward based on acts of kindness we had received in return, and the idea was to take that name and give it some more meaning with ReeSpecht Life.”

The message of positivity can be passed on to another person in the form of a free, ReesSpecht Life “Pay it forward card” available for free on the site, with the lone request that people describe what act of kindness landed the card in their possession.

QUEENS -- Authorities have launched a search for a man accused of stealing from worshippers as they prayed in Queens mosques.

Police received at least two reports dating back to Feb. 23 and as recent as April 3.

EAST WILLIAMSBURG, Brooklyn — After a woman was sexually assaulted on a Brooklyn street Monday night, police on Thursday asked for the public's help in identifying a man believed to be responsible.

The woman, 24, was walking near the corner of White and Seigel streets, in East Williamsburg, around 9 p.m. when the unknown man came up behind her, authorities said.

How long does protection from COVID-19 vaccines last?

Experts don't know yet because they're still studying vaccinated people to see when protection might wear off. How well the vaccines work against emerging variants will also determine if, when and how often additional shots might be needed.

How long does protection from COVID-19 vaccines last?

DMX memorial to be held Sunday

Mother of 4 beaten to death while working at Florida motel; husband finds her left for dead