ST. GEORGE, Staten Island — A mass was held Saturday at Saint Peters Church to honor NYPD Detectives James Nemorin and Rodney Andrews on the 15th anniversary of their deaths. 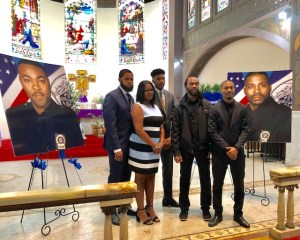 In a crime that horrified the city, Nemorin and Andrews were shot and killed execution style in 2003 during an undercover “buy and bust” operation for the Firearms Investigation Unit. The officers were shot in the backs of their heads. Both men had been with the NYPD for seven years at the time of their deaths.

Ronell Wilson was charged and convicted for the officers’ deaths. Wilson, who argued that he did not know the men were cops, was sentenced to death in 2007. The sentence was overturned because of mistakes made by the prosecution and Wilson was retried in 2013. The second jury sentenced him to death once again in just under four hours. However, Wilson was taken off death row in 2016 after a federal judge ruled that he could not be executed because he is intellectually disabled.

Detectives James Nemorin and Rodney Andrews made the ultimate sacrifice while working undercover to stop illegal gun trafficking on Staten Island on this date 15 years ago. Join us in remembering the bravery and sacrifice of these two NYC heroes. pic.twitter.com/7gJuYBXgv5

The detectives’ children all attended the mass honoring their fathers’ lives and accomplishments. They expressed gratitude that the NYPD has never forgotten their fathers’ sacrifice.