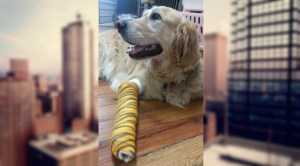 He suffered a bad cut to his front leg, but is resting comfortably, according to the veterinarian. (Middlebranch Veterinary)

BREWSTER, New York – A service dog named Figo is enjoying a hero’s welcome at an upstate New York veterinarian clinic after he threw himself in front of a bus to protect his blind owner, according to authorities.

Figo and his owner Audrey Stone were trying to cross a Brewster street Monday morning when the dog, trained to guide and protect his owner, noticed that the mini school bus wasn’t slowing down.  Witnesses said Figo then jumped between Stone and the rushing vehicle as the bus slammed into them.

“The dog took a lot of the blow,” Brewster Police Chief John Del Gardo told the Journal News.  “And he did not want to leave her side.  He stood right with her.  He was there to save her.”

“He was flopping over to her, and she didn’t want him to get away from her, either,” said Paul Schwartz, who works at a nearby gas station.  “She kept screaming Figo’s name; we kept telling her he was fine.”

The male golden retriever underwent surgery for his wounds, and his owner, Audrey Stone, is also recovering.  Figo’s front right leg was cut to the bone, and some of his fur was torn off during the impact of the collision.  Stone, 62, suffered a broken ankle, elbow and ribs and a head wound.  She is now being treated in a Danbury, Connecticut hospital.

“(Figo) is doing well, resting comfortably.  We’re letting him have the afternoon off,” quipped a spokeswoman at the Middlebranch Veterinary.

The driver, who had two young children aboard, stayed at the scene.  He’s been removed from duty as police continue to investigate the incident.