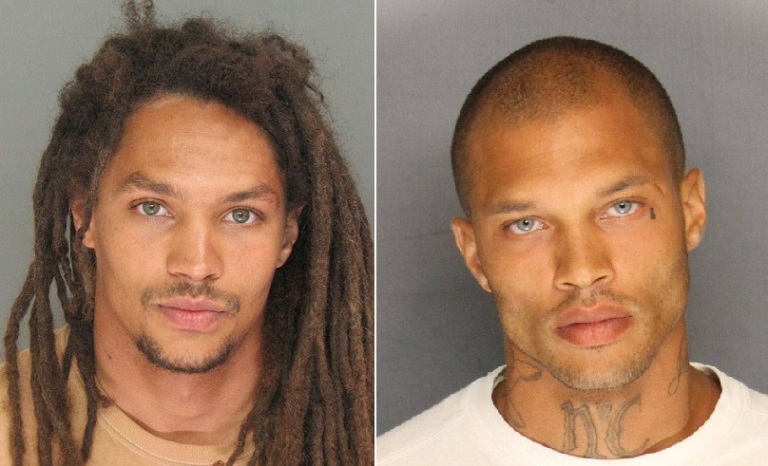 Sean Kory (left) may be the newest “hot convict” since Jeremy Meeks (right).

Sean Kory, 29, of Santa Cruz, was arrested after he allegedly attacked a person dressed as a Fox News reporter, authorities said Saturday.

Kory told the unidentified victim he “hates Fox News” and then grabbed his microphone. The 29-year-old allegedly proceeded to rub the microphone on his crotch.

Police say he attacked the victim with an aluminum tennis racquet. The “Fox News reporter” was able to walk away without serious injuries.

He reported Kory to police and upon arrival, the suspect tried to flee officers, but was eventually caught.

The man’s mugshot went viral over the weekend with social media users saying Jeremy Meeks has competition. Meeks previously made headlines in June for his “sexy” mugshot.

Meeks, 30, was arrested along with three other men during a gun sweep in Stockton. His photo ended up inspiring #FelonCrushFriday, as well as a plea on the Internet to free the convicted felon.

#SeanKory, When you get out of jail… I’ll be waiting boo.

Not everybody is blown away by Kory’s looks. Some social media users have expressed their preference to Meeks instead.

Spotify Wrapped: How to find your top songs

Spotify Wrapped: How to find your top songs

Could MTA fares rise even beyond scheduled hikes?

Making a good first impression on a first date

Create a festive Christmas party with these mini …