WARNING: Language in the video may be considered offensive.

STORRS, Conn. — A University of Connecticut student has been arrested after a video surfaced of the apparently drunk 19-year-old demanding mac and cheese then berating campus staff when they refused to serve him.

According to FOX CT,  Luke Gatti of Bayville, Long Island, was arrested by University of Connecticut police Sunday night and charged with breach of peace and criminal trespassing.

Police responded to the  Union Street Market in the Student Union where employees say Gatti argued after being refused service for drinking alcohol in the market. Gatti then became physically and verbally abusive to the employees.

It was all recorded on a cell phone camera and posted to YouTube.

The video shows Gatti refusing to leave until he gets his [explicit] bacon jalapeño mac and cheese.

Gatti is also seen calling the employee anti-gay slurs, then pushing him before being wrestled to the ground by another employee.

“I told you, you don’t touch my boss,” the employee yells as he holds down the student.

Gatti responds with, “I was just trying to get my [explicit] food!”

As Gatti escorted out by police, Gatti spits at the employee.

According to MassLive.com, Gatti was arrested twice in 2014 while a student at UMass Amherst. 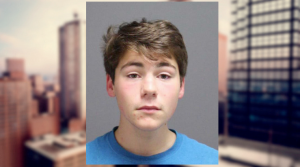