QUEENS (PIX11) — A Queens father who butchered his wife to death in a jealous rage and kissed, then fatally hacked his two, slumbering toddler daughters —  he said he didn’t have car seats for them in his getaway car — was sentenced to 45 years in state prison on Friday.

Delivering an epic tongue lashing against the killer, Queens Supreme Court Justice Kenneth Holder sentenced Miguel Mejia-Ramos, 29, who Holder called a “vile and despicable man.” The justice, seething with outrage, said the killer was lucky the death sentence can no longer be imposed in New York.

He tore into a man who murdered his wife over “nothing” and had the audacity to kill two innocent children he was supposed to protect and walk down the wedding aisle one day, not slaughter in cold blood.

“It is truly difficult to find words to describe how sickened people are in this courtroom at the sight of you,” Holder said, saying what he did repulses even the most hardened of criminals. 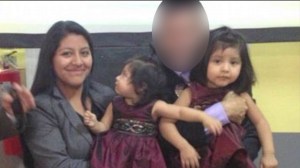 Wife and two daughters of Miguel Mejia-Ramos, 29, pictured with an unidentified man.

As she broke into tears, the mother of Mejia-Ramos’ wife spoke of her agony after losing her daughter and only child, and her beloved grandchildren.

“He has not only destroyed me, but his mother’s life and his family as well. He has destroyed many families,” she said. ” All I ask from him is for him to ask God for forgiveness. I could do a lot of evil things like curse him or ask for his head.  But I know that my daughter is not coming back.”

Said Queens District Attorney Richard Brown in a statement: “Justice has been swift and it has been certain,” he said. “He has accepted his fate that he will quite likely spend the rest of his days in prison and never see the light of day again.”

As his 21-year-old wife, Deisy Garcia, slept at their Jamaica home last January,  a drunken Mejia-Ramos arrived home and thumbed through her cell phone, finding a photo of her with another man, he told authorities.

“It is truly difficult to find words to describe how sickened people are in this courtroom are at the sight of you.” Justice Holder

Enraged, he pulled a knife from a butcher block  and attacked her.

She awoke to the knife’s thrusts into her body, and was so brutally eviscerated the blade broke.  He then repeatedly plunged the knife into his two young daughter,  2-year-old Daniela Mejia and 1-year-old Yoselin Mejia.

After the murders, he drove south in an attempt to reach Mexico, but was apprehended in Texas by U.S. Marshals in January.

In court on Friday, a cool Mejia-Ramos briefly spoke before the judge lashed into him,

“I would like to ask God for forgiveness,”as well as the entire family, he said. “This sentence is not enough for me to pay for what I have done to these people. And I ask for forgiveness for the horrible damage that I have caused.”

“I truly believe that the person who invented the electric chair or the gas chamber most certainly had you in mind when they designed it,” he said.

The justice took comfort in knowing that the killer would have to wrestle with his conscience — and the memory of the atrocity he committed — for the rest of his life.

INDIANAPOLIS (NewsNation Now) — The names of the eight victims killed in Thursday's mass shooting at an Indianapolis FedEx facility were released Friday evening.

Indianapolis Police Deputy Chief Craig McCartt said four of the victims were killed outside the building and another four inside while many employees were on a shift change or dinner break. At least five more victims were taken to the hospital for wounds from the shooting.

JAMAICA, Queens --- The title of NYPD chief of department may be new, but for Rodney Harrison, it's a continuation of a job he's been at for 29 years.

In his first one-on-one with PIX11 News since taking the position, he told us he's starting his new job by strengthening policies and practices.

MANHATTAN --- The COVID-19 pandemic has changed the world.

For the past 13 months, much of what we do is framed by it.

How we talk. What we talk about. And how we act.

"I don't think I used the word 'quarantine' one time until this whole sort of COVID situation emerged," New Yorker Alex Libman said.

Exclusive: Gangland NYC — How a judge’s decision may be connected to Junior’s mistaken identity murder