BRONX — Reality star Lyric McHenry was found dead on a sidewalk in the Bronx early Tuesday morning, according to multiple reports. She was 26.

The NYPD confirmed that a 26-year-old woman was found at about 5:05 a.m. Tuesday near Undercliff Avenue and Boscobel Place, bordering Highbridge and Morris Heights.

She had no visible signs of trauma, and was unconscious and unresponsive, according to police. The woman was transported to the hospital where she was pronounced dead. A medical examiner will determine her cause of death.

The NYPD has not released the woman’s name pending family notification, but multiple reports have identified her as the YouTube star.

A law enforcement source told PIX11 News on Wednesday that the woman found dead is McHenry.

According to the New York Daily News, McHenry, who was 20 weeks pregnant, was dressed in a pajama top and underwear but no pants. The Daily News reported that a small Ziplock bag of what appears to be cocaine was found on her person and that drug overdose is suspected.

Hours before the woman’s body was found, McHenry’s Instagram story revealed she was partying at several places around New York City, including the Frederick Hotel, the SoHo Grand and Dream Downtown in lower Manhattan.

The last video she posted shows McHenry with her arm around a man, the Manhattan skyline behind her. She blows a kiss to the camera as the man exclaims, “It’s your birthday!” 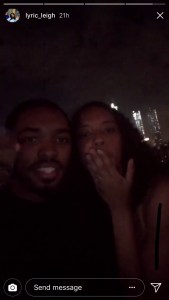 McHenry starred in the 2016 E! Channel reality series EJNYC with her friend EJ Johnson, who is the son of basketball legend Magic Johnson. The show lasted one season.

“Happy birthday to my best friend who has strutted with my in princess gowns since day 1 @lyric_leigh words cannot express how much I love and appreciate you in my life. Your constant love, respect and companionship gives me the confidence to live my truth every single day and I am so blessed that even as baby divas we recognized the greatness in each other. I love you ❤️ #leoseason #teamthis.”

Before her television debut, the Stanford graduate worked for the Obama presidential campaign, according to her Instagram account.