NEW YORK — Pope Francis has arrived at the diplomatic residence for the night after offering an evening prayer service at St. Patrick’s Cathedral that marked the start of a highly anticipated two-day visit to New York that has already brought stirring moments of emotion.

Francis, in his popemobile, headed up Fifth Avenue to the peels of church bells and the roar of the crowds with smartphones in hand, and then entered St. Patrick’s Cathedral, the fourth pope to ever do so. His dramatic entrance to St. Patrick’s included a poignant moment, with Francis stopping to bless a young girl in a wheelchair, who then broke down in tears.

He led a vesper’s prayer service (or evening prayers) at the newly restored cathedral in his only public event of the day in New York.

He first offered prayers for the Muslim community as they mark Eid al-Adha, the feast of the sacrifice, and gave his condolences for the  deadly stampede earlier in the day during the hajj in Mecca.

Timothy Cardinal Dolan warmly welcomed the pope, telling him that entering St. Patrick’s Cathedral officially made him a New Yorker.  “Thanks for coming by. Come back soon,” he said.

Leaders including Gov. Andrew Cuomo, Mayor Bill de Blasio, Sen. Charles Schumer and other were at the service.

The pope is retiring for the night at the diplomatic residence on the Upper East Side. He has a Friday ahead of him that is packed with events that will take him to East Harlem, Central Park, Madison Square Garden, the United Nations, the World Trade Center and, given the pope’s tendency to march to his own drummer, other potentially unanticipated places.  For a pope visiting New York — and the United States — for the first time, the 78-year-old Francis is seemingly making up for lost time.

At Kennedy Airport, the pontiff mingled with well-wishers on the tarmac and posed for photos, even accepting a Pope Francis doll in a moment of characteristic mirth. He then boarded a helicopter that whisked him to a lower Manhattan heliport, where a motorcade — he in his signature simple Fiat hatchback — took him up the FDR Drive.

The procession through Manhattan was marked by some of the most stringent and comprehensive displays of security in the city’s history, as officials try to protect a highly popular pope who thrives on mingling with the faithful. A further challenge is faced by city residents, who must contend with another full day of paralyzing gridlock as the pontiff makes his way through the city.  [DETAILS HERE]

Earlier, the pope left Washington, D.C., where he urged the country not to turn its back on undocumented immigrants, to reject the victimization of religious and ethnic minorities, to overcome income inequality and to save the planet from climate change, citing Scripture and the nation’s founding ideals in a historic address to Congress.

Francis, who was greeted on the streets of Washington by tens of thousands of exuberant admirers, made a clear connection between undocumented immigrants in the U.S. and the human exodus of Syrians and others into Europe from wars raging in the Middle East.

“On this continent, too, thousands of persons are led to travel north in search of a better life for themselves and for their loved ones, in search of greater opportunities,” he said of migrants from Central and South America, indicating they needed to be treated as people seeking refuge rather than as exploiting the United States’ porous borders. 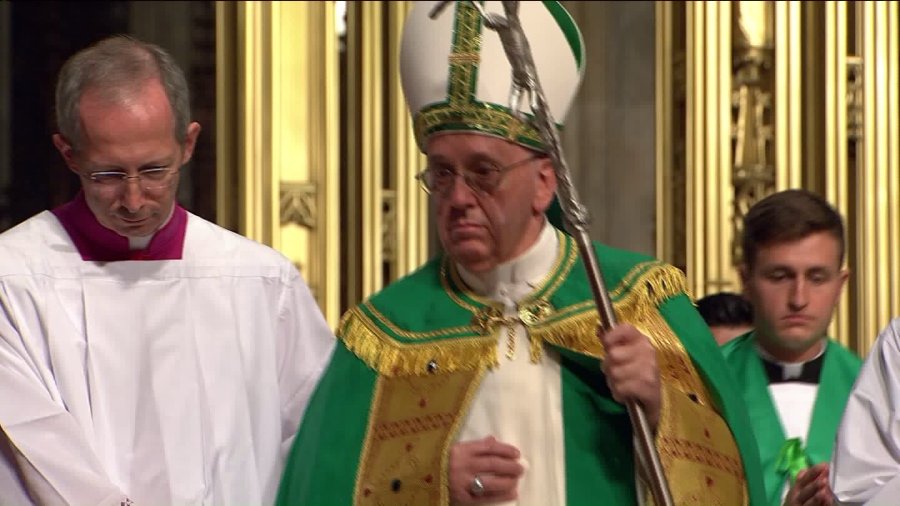 He continued, “We must not be taken aback by their numbers, but rather view them as persons, seeing their faces and listening to their stories, trying to respond as best we can to their situation.”

In the 40 hours the pope will spend in New York, he will visit the United Nations, pay tribute to the 9/11 victims at the World Trade Center and celebrate Mass with thousands at Madison Square Garden.

On Friday, Pope Francis will visit the Our Lady Queen of Angels School, which serves 295 mostly Latino and black children — which is in line with Francis’ mission of serving immigrants, the marginalized and the poor. It also illustrates the Roman Catholic Church’s struggles with changing times, diminishing congregations and a dwindling priesthood.

“This is his most important stop,” Monsignor Kevin Sullivan, executive director of Catholic Charities, said the of the Pope’s East Harlem visit. “We think this is the perfect place for Pope Francis to be.”

Schedule of Events on Friday:

4 p.m. — Visit with Our Lady Queen of Angels School in East Harlem

MTA is rerouting portions of more than two dozen lines during the papal visit. Between 3 p.m. Thursday and 10 a.m. Saturday commuters are advised to take the subway whenever possible.

AHOSKIE, N.C. (WAVY) – A grieving family is in disbelief after a funeral home mix-up in North Carolina left a stranger in their mother's casket, wearing her clothes.

Sisters Jennifer Taylor and Jennetta Archer lost their mother, Mary, last month. On the day of her viewing at Hunter's Funeral Home in Ahoskie, they walked up to their mother's casket and found another woman lying inside.

OKLAHOMA CITY (KFOR) -- An Oklahoma minister accused of touching a child inappropriately at a bus stop has been arrested.

Michael Coghill, 33, is accused of lewd acts to a child. KFOR confirmed Coghill used to work for Choctaw Church of Christ and currently works as a minister at Lakehoma Church of Christ in Mustang.

Which states are you most likely to die in an animal attack?

SAN FRANCISCO, Calif. (KRON) – Every year, people die in encounters with animals, but which states rank highest for such fatalities?

According to a report from Outforia, an outdoor and nature resource website, Texas overwhelmingly ranked No. 1, recording 520 deaths over 20 years compared to the second-ranked California, which had 299 deaths for the same time period.

No bus? No problem. Colorado boy kayaks to school