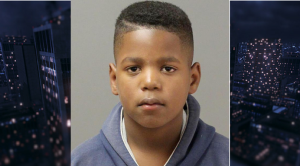 Jarrell Milton, 12, is wanted in connection with the murder of a man in a drug deal gone wrong.

OMAHA, Neb. — Police are searching for a 12-year-old boy suspected of involvement in a drug-involved shooting in Nebraska that left one man dead.

The boy, identified as Jarrell Milton, is part of a trio of teens allegedly involved in the shooting on June 29.  The other two boys,  identified as 15-year-old Shuntayvious Primes-Willis and 17-year-old Jamar Milton, Jarrell’s older brother, have already been arrested.

“All three boys had a gun last week, and went to Miller Park where they shot two men, killing one of them,” said Douglas County attorney Don Kleine, according to KETV. Kleine said Jarrell Milton is the youngest person he can remember wanted for a role in a first-degree murder.

“It’s incomprehensible. It’s unbelievable when you think of somebody who’s 12 years old, seventh grade or sixth grade, and being charged with murder for having a gun– approaching somebody and using that firearm with two other people that also had firearms,” Kleine said, according to WOWT.

The three boys allegedly shot and killed Jamyell Ray, 31, and injured another man, Charles Fisher, 30, sending him to the hospital. Jamar and Shuntayvious were charged with first degree murder on Tuesday in court, and are being held without bail.

A prosecutor alleged Tuesday that the three boys arranged to meet the men to purchase marijuana. When they met, the boys displayed guns and Shuntayvious fired his weapon, according to an account in the Omaha World-Herald, one of at least two used.

A former guardian of Shuntayvious said that he would have never shot someone unless someone was pushing him to do it, according to KETV.

The police are still looking for Jarrell, and are offering a $25,000 reward for the tip that leads to his arrest.

Kleine says they intend to try all the boys as adults, and still find it hard to believe that such a young boy could be involved.