It’s round two for the Second Avenue Subway in the heart of Harlem.

When will it open? How will it be funded? What are the specific designs?

Phase Two would add three new stations at 106th and 116th Streets on Second Avenue and connect to the Lexington Line at 125th Street. Some of the tunneling has already been done during previous work on the project.

Neighbors, riders, and home and business owners are taking a closer look at the maps which offer details about entrances and support structures.

Contractors are working in the area to gather soil samples for the initial stage of the project. Construction could start at the end of 2020.

The MTA has a process to work with property owners who are displaced. Project officials say, for this phase, ancillary structures that provide ventilation and  support the system could include commercial and residential space. 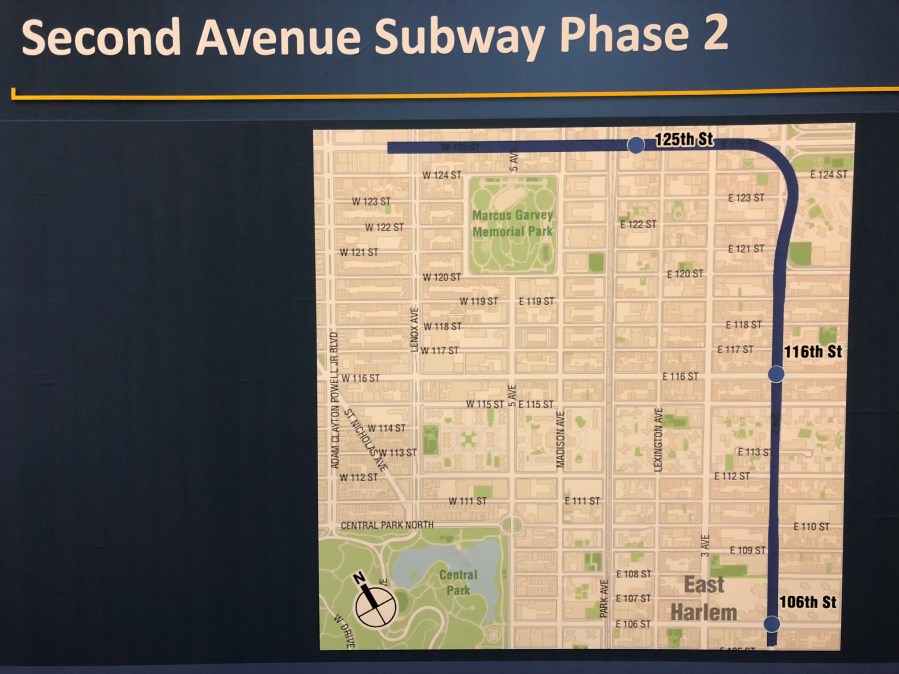 Manhattan Community Board 10 Transportation Chairperson Raquel Vazquez looks forward to the project and wants to make sure small businesses are a part of the planning process.

MTA officials are wrapping up the required Environmental Impact Review period. The project is in the design and engineering phase.

A document filed with the Federal Transit Administration says revenue service could begin between 2027 and 2029.

Significant federal funding for this project is expected to be available in 2020. More than a billion and a half dollars has been included in the current MTA Capital Plan for big projects.

The project has been a priority for the MTA since the opening of Phase One on the East Side in January 2017. After decades of starts and stops, construction on that portion had a ground-breaking in 2007.

There will be significant utility and road work required between the stations at 106th and 116th Streets. Deep drilling will happen along Second Avenue from 116th Street to meet up and create the station at 125th Street. Underground train storage tracks will stretch past that station to Lennox Avenue.

Ventilation facilties will be built near the new stations. Those specific locations are still being considered. MTA officials say the buildings along 125th Street will not be “blank walls.” The vent and power facilities can also include retail and commercial space.

A Neighborhood Center with information about the project opened in 2017 on 125th Street at Park Avenue.