NEW YORK (PIX11/AP) — A Brooklyn man has been charged in connection with a melee on the Brooklyn Bridge between protesters and a pair of police officers, according to NYPD.

Robert Murray, 43, has been charged with assault on a police officer, resisting arrest, inciting to riot and obstructing governmental administration.

Earlier this week, police called for help finding seven protesters accused of assaulting two plainclothes lieutenants who were corralling a crowd of demonstrators, gathered on the Brooklyn Bridge Dec. 13 to decry a grand jury’s decision not to indict a police officer in the in-custody chokehold death of Eric Garner. 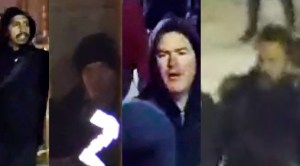 According to police, these men attacked two lieutenants who tried to arrest another protester. (Photo: NYPD)

Four men and three women were caught on camera grabbing, kicking and punching two NYPD lieutenants who were trying to make an arrest and stop another protester from throwing a trash can off an elevated walkway, police said.

The incident marred a mostly peaceful protest in which tens of thousands of demonstrators took to city streets in what was by far the largest of several protests this month in response to the grand jury’s decision. 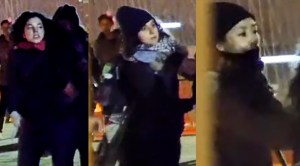 Police say these three women were involved in an assault on two NYPD lieutenants. (Photo: NYPD)

Commissioner William Bratton has said there have been six arrests for assaults on police officers during the protests this month, not including Saturday’s incident. He said the city has spent $23 million on overtime to secure the events.

The reward for information leading to arrests and convictions of the other suspects has risen to $25,000.