QUEENS VILLAGE, Queens (PIX11) –– A 25-year-old NYPD officer died Monday from injuries he suffered when he was shot in the head while sitting in an unmarked car in Queens, officials told PIX11 News.

Officer Brian Moore had been in a coma since Saturday night when he underwent surgery for what court papers described as “severe injuries to his skull and brain.”

On the force for barely five years when he was killed in the line of duty, Moore comes from a family of police officers, the department said. Moore’s father and uncle are retired NYPD sergeants, and a cousin of Moore’s is also on the force.

“In his very brief career, … he had already proved himself to be an exceptional young officer,” Police Commissioner William Bratton said outside Jamaica Hospital, where Moore was rushed after the shooting.

Demetrius Blackwell, 35, is accused of firing at Moore and his partner as they sat in plainclothes in an unmarked police car Saturday night. The pair of officers pulled up alongside Blackwell about 6:15 p.m. in front of 212-11 104th Road, the Queens District Attorney said. Police said the officers noticed a man “walking and adjusting an object in his waistband.” 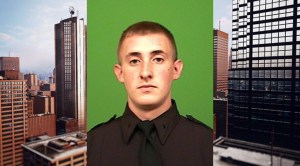 It was then that Blackwell allegedly pulled a gun from his waistband and “fired a number of shots” at Moore and his partner Officer Erik Jansen, the DA said. Moore, who was sitting in the driver’s seat, was struck in the head. Jansen was not injured.

“Both officers were still seated in the vehicle and did not have an opportunity to get out or return fire,” the police department said.

After allegedly opening fire, Blackwell ran from the scene. With Moore mortally wounded behind the wheel, Jansen radioed for help and a manhunt began. It ended 90 minutes later when Blackwell was taken into custody inside 104-25 212th Place, NYPD said.

Detectives believe they found the gun used to shoot Moore. The weapon was discovered in a backyard Monday and determined to be stolen in 2011 from a Georgia bait and tackle shop, officials said.

Blackwell was ordered held without bail Sunday. He did not enter a plea to multiple charges, including two counts of attempted murder. Those charges were upgraded Monday to include first-degree murder, which carries a penalty of life in prison without the possibility of parole.

The suspect has “an extensive arrest history,” which includes criminal possession of a weapon and robbery, and has spent time behind bars, NYPD said.

Moore is the third NYPD officer in the past several months to be shot to death in his squad car. Posthumously promoted to detectives, Rafael Ramos and Wenjian Liu were killed “execution style” Dec. 20, 2014, while they waited at a stoplight in the Flatbush section of Brooklyn, allegedly by a man vocal about his disdain for police officers and who turned the gun on himself after shooting the pair.

Police Benevolent Association President Pat Lynch said though Monday marks yet another dark, tragic day in the department, law enforcement personnel will continue to do the jobs they were sworn to do.

“They may have sadness in their eyes, but there’s bravery in their heart.”

Mayor Bill de Blasio offered his condolences in a statement asking New Yorkers to “come together to support the Moore family in any way we can.”

Ukrainians in US brings attention back to war