NEW YORK (PIX11) — Sugary sodas — with their link to obesity, diabetes and cavities, to name a few unsavory connections — should be treated like cigarettes, according to a New York lawmaker trying to slap a warning label on sweet drinks. Assemblyman Jeffrey Dinowitz (D-Bronx) has proposed the Sugar-Sweetened Beverages Safety Warning Act to do just that.

The law would require that all sugary drinks be labeled with the message: “Safety Warning: Drinking beverages with added sugar contributes to obesity, diabetes, and tooth decay,” according to the New York State Assembly’s online legislation library.

Dinowitz’s bill has been referred to consumer affairs and protection for further evaluation.

Beverages that don’t have added sweeteners, that use milk as the principal ingredient, are used as infant formula, and drinks that use 100 percent fruit or vegetable juice would be spared the label, according to the legislation.

Research has linked the consumption or one to two sugar-sweetened drinks per day to a 26 percent jump in an individual’s risk of developing type 2 diabetes.

“The prevalence of obesity in the state has increased dramatically over the past 30 years,” the proposed law reads. “Although no group has escaped the epidemic, low income communities and communities of color are disproportionately affected.”

Should the bill be made into law — and there are several more legislative hurdles it must overcome to do so — it would take effect Jan. 1 of the year that follows its passage.

This is not the first time a lawmaker has tried to regulate what New Yorkers drink.

Former Mayor Michael Bloomberg famously tried to ban large sugary sodas in city limits, but failed when a state court ruled the city’s health board lacked the authority to impose the ban.

Current Mayor Bill de Blasio has expressed his support for limiting the size of sodas sold in the city. 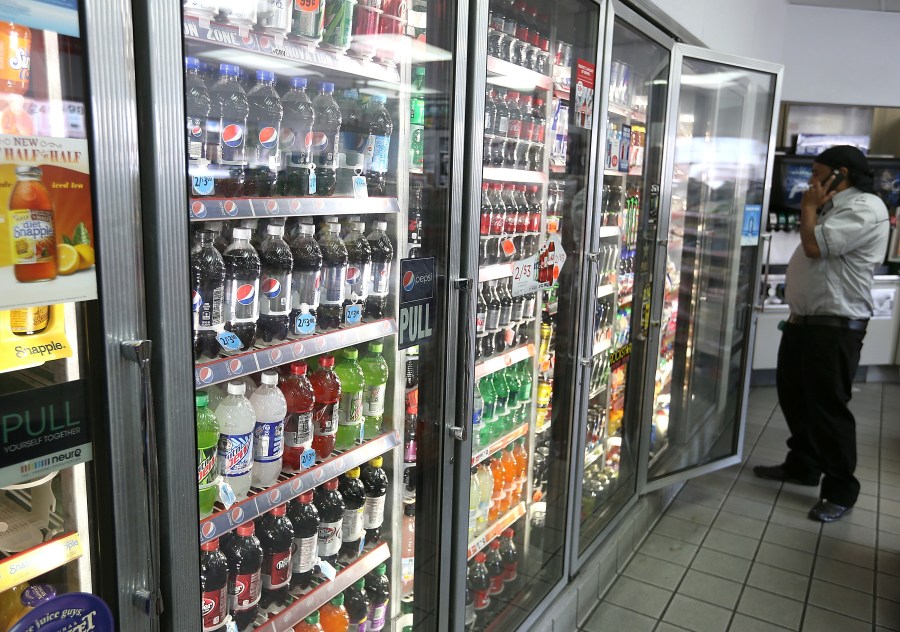 Grabbing a soda from the fridge will be met with a warning label, if a Bronx assemblyman’s proposed bill becomes law. (Photo by Justin Sullivan/Getty Images)