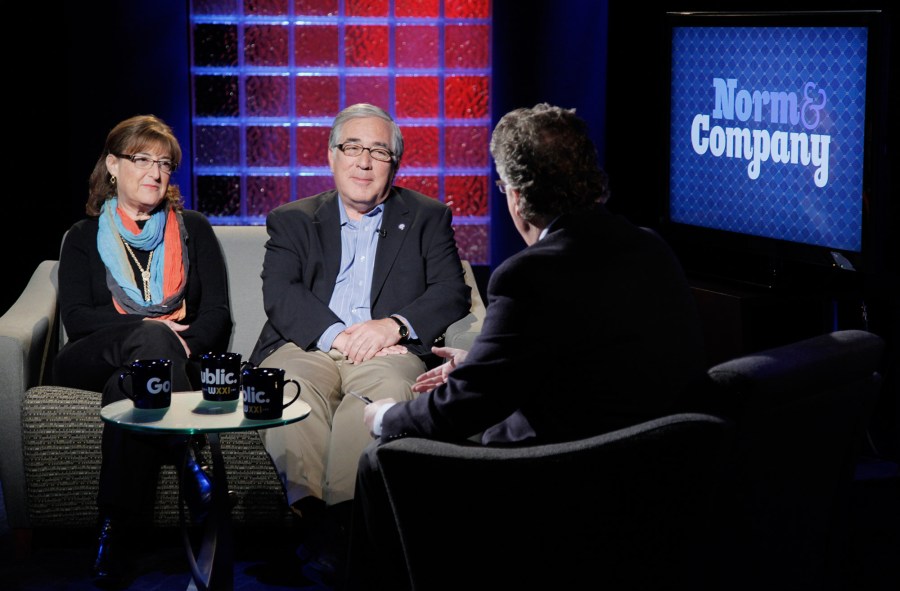 Its pilot contacted air traffic control while flying near Statesville, North Carolina — about 600 miles south of Rochester — asking to descend because of “an indication that is not correct in plane,” according to a stream of that conversation posted on LiveATC.net.

But he never declared an emergency or asked for assistance, beyond requesting to move down to 18,000 feet.

The FAA earlier said the pilot of the TBM-900 aircraft — which had taken off at 8:45 a.m. ET from Rochester destined for Naples, Florida — stopped responding to calls about 10 a.m. ET.

While there was no official confirmation of who was aboard the aircraft, the family of a prominent Rochester couple — Larry and Jane Glazer — said they were “devastated.”

Scott Fybush, the family spokesman and also the Glazers’ nephew, said he believed that the couple were the only people on board the plane and that Larry Glazer was flying as the couple headed to their vacation home in Florida. The U.S. Coast Guard, however, issued a statementing indicating there were “three people reportedly aboard” the plane.

When contact with the plane was lost, two F-16 fighter jets set out from Richland County, South Carolina, “to investigate,” the North American Aerospace Defense Command (NORAD) reported. Another pair of fighter jets out of Homestead, Florida, F-15s, took over around 11:30 a.m. and escorted the plane as it entered Cuban airspace.

The F-15 pilots could see, before the small plane’s windows frosted, a pilot slumped over, according to a NORAD official. The official said one or two other people were believed to be on board, though the number was not confirmed.

The U.S. military agency tweeted that those on board may have suffered from hypoxia, a condition that sets in when a person doesn’t get enough oxygen.

When the American fighter jets broke off their pursuit 12 miles off Cuba, the TBM-900 plane was cruising at about 25,000 feet.

A Cuban fighter jet was later sent to trail the aircraft as it flew near that Caribbean island, according to NORAD. Cuba was cooperating with the United States on the matter and did not consider the plane’s movement a violation of its airspace, according to a Cuban source involved in conversations between the two nations.

The aircraft’s last known radar contact — according to the flight tracking site, FlightAware.com — was at 2:11 p.m. ET off of Jamaica. This corresponds roughly to estimates on when it would likely have run out of fuel.

The plane crashed into the water about 2:15 p.m., according to NORAD.

At that time, the aircraft had dramatically lost airspeed to 176 knots (200 mph), down from a consistent 308 knots for most of its flight.

Citing preliminary reports, National Security Minister Peter Bunning said the plane went down 14 miles northeast of the Jamaican parish of Portland, which is on the Caribbean Sea country’s northeast coast.

Jamaican military aircraft were sent to the scene, said Bunning, and his government announced via Twitter that Jamaican coast guard vessels were heading there as well.

The United States made its presence known as well.

A U.S. Coast Guard spokesman said that a C-130 aircraft out of Clearwater, Florida, was sent and, by 5:30 p.m., that plane and Jamaican aircraft were at the scene.

A short time later, Maj. Basil Jarrett of the Jamaica Defense Force told CNN that Jamaican authorities had “spotted a wreckage field” in the area where the small plane is believed to have gone down.

The crashed plane was built by the French manufacturer Daher-Socata and powered by one Pratt and Whitney engine.

While there was no official announcement immediately on the fate of those on the plane, the children of Larry and Jane Glazer said in a statement they were “devastated by the tragic and sudden loss of our parents.”

“They loved and appreciated the opportunity to help build the community of Rochester, and we thank everyone in the community for their expressions of support,” the children said.

Larry Glazer co-founded Buckingham Properties in 1970, a year after graduating from Columbia University. According to his official bio, the company owns and manages more than 50 properties totaling over 9 million square feet in the Greater Rochester area.

Jane Glazer founded of QCI Direct, a 100-employee company that has an outlet store and makes “two national retail catalogs mailed to 35 million people annually,” according to its website.

A post on Women Entrepreneurs Blog, which is produced in conjunction with the University of Rochester’s business school, notes that she ran the New York City Marathon, did whitewater rafting and learned how to fly a plane — all in addition to raising three children and building her business.