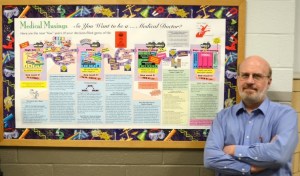 PARAMUS, N.J (PIX11) – A 65-year-old Bergen County Academies teacher was arrested Tuesday after “sexually explicit” emails between him and a 16-year-old student were uncovered, according to police.

The Special Victims Unit and Computer Crimes Unit reported that at the advice of her family, the 16-year-old victim provided specific information to detectives in an interview Tuesday. The emails were also turned over, and DeWitt was arrested the same day.

DeWitt was charged with Attempted Sexual Assault, Endangering the Welfare of a Child, and Criminal Sexual Contact. His bail was set at $300,000 and was ordered to have no contact with victim, as well as to surrender his passport. He is currently being held at Bergen County Jail.

DeWitt is a married Warwick, NY resident who earned a BS in Zoology, MS in Biology and a PhD in Cardiovascular Physiology from the University of Michigan. He also taught at Stevens Institute of Technology for eight years.