LEWISVILLE, Texas — More than 7 years after two teenage sisters were killed, the search continues for their overbearing and allegedly abusive father suspected of shooting his daughters multiple times, leaving their lifeless bodies abandoned in his taxi in Texas.

By the time officers arrived, 17-year-old Sarah and her 18-year-old sister Amina were dead and their father was long gone, along with his handgun and all of his savings. That was New Year’s Day 2008 and the patriarch hasn’t been seen since.

Investigators believe Said drove his daughters in his taxi to a secluded spot and shot them both multiple times. 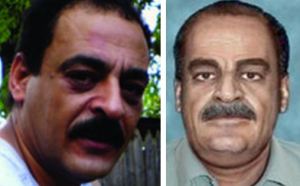 The tragedy coming years after he was indicted for sexually penetrating his daughters when they were just 8 and 9 years old, and after

The victims’ mother, Patricia, said Said was abusive and manipulative. She said she left him shortly after he was indicted for sexually penetrating her daughters, but then returned — a decision, she says, that still haunts her.

“I can’t give you a good reason why I went back, because there is no good reason,” she told CNN. “When I took them back, I failed my kids.”

Said is now one the FBI’s Top 10 Most Wanted fugitives and the subject of this weekend’s “The Hunt With John Walsh.”

Said has birthmarks on both sides of his neck and a scar on his left eyebrow. He frequently wears dark sunglasses, even indoors. He’s also a frequent customer of Denny’s and IHOP. He smokes Marlboro Light cigarettes and enjoys smoking a hookah.

If you’ve seen Yaser Said or know anything about his whereabouts, remember, he may be armed and dangerous. So please call 1-866-THE-HUNT or go to our website at CNN.com/TheHunt. You can remain anonymous; we’ll pass your tip on to the proper authorities. And if requested, will not reveal your name.

To read the complete story from CNN about Yaser Said, click here.