WOODHAVEN, Queens — Multiple school buses became stuck in the snow Monday as they tried to traverse snowy streets in Queens, the borough hardest hit by the weekend’s blizzard.

Residents were furious over unplowed streets and the mayor’s move to keep schools open despite the record-breaking storm.

“We make one decision for a school system of 1.1 million kids,” Mayor Bill de Blasio said, defending the move to keep class in session, during a midday news conference.

PIX11 News viewers in Middle Village and Woodhaven reported seeing school buses getting bogged down in the slushy mess that still coated the roadways during the morning commute.

Requests for comment from the city’s Department of Education were not returned by the time of publication.

In Middle Village, a resident who identified herself as Laura S. said the bus became stuck on 74th Street about 6:30 a.m. and students were taken off the bus at 9:30 a.m.

In Woodhaven, a school bus and a van were seen struggling to trek through the snow, resident Paul Kirch said.

The weekend blizzard was the second-hardest to hit the city in recorded history, dumping almost 3 feet of snow in parts of the five boroughs. Queens was especially pounded and snow fell at a rate that the plows couldn’t keep up with, about 3 inches per hour. Some 30 inches of powder fell at Kennedy Airport, according to the National Weather Service. 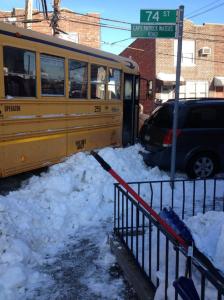 EXPLAINER: What is the sexual harassment training Gov. Cuomo claims to have taken?

Since Oct. 8, 2019, every employer in the state has been required to provide the training for their employees.

California city bans new gas stations; believed to be 1st in US

PETALUMA, Calif. — A Northern California city has become what’s believed to be the first in the country to ban all new gas stations in an effort to curb emissions.

The San Francisco Chronicle reports that the Petaluma City Council voted unanimously Monday to prohibit the creation, expansion, reconstruction and relocation of gas stations. It encourages owners to transition to stations that serve electric and hydrogen-powered vehicles.

The governor has been under fire with dueling controversies regarding the state's handling of nursing homes during the pandemic, and three sexual harassment allegations against the governor.

California city bans new gas stations; believed to be 1st in US

‘It would have been better to do nothing’; NYS Republican Leaders blast Dems’ emergency powers deal

COVID-19 vaccine: How many people are fully vaccinated in each state?

NY Gov. Andrew Cuomo apologizes amid sexual harassment allegations, but does not resign

1 in 3 nonprofits in danger of closing due to pandemic

Third stimulus check: Americans who make more than $80,000 may not get direct payment

Third stimulus check: Americans who make more than $80,000 may not get direct payment

6 Dr. Seuss books no longer being published over offensive depictions