It’s an act New Yorkers are all too familiar with — commuters who sit with their legs spread out far enough to take up neighboring seats. 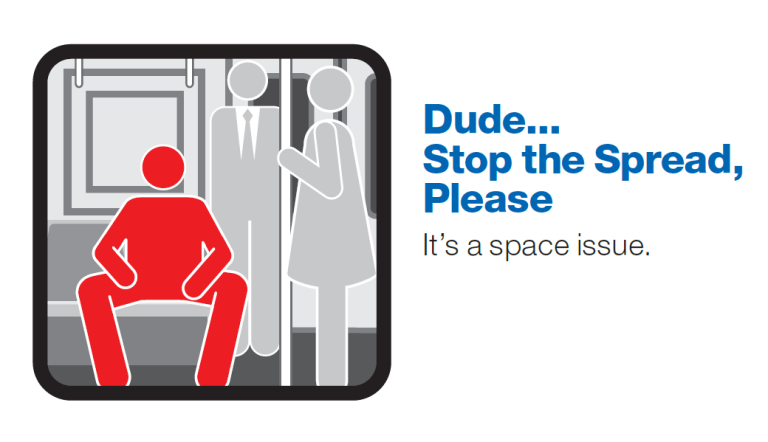 In an effort to raise awareness and decrease “the spread,” the MTA will release a series of advertisements including one which will say “Dude…Stop the Spread, Please.”

But men aren’t the only ones being targeted in the new “Courtesy Counts, Manners Make a Better Ride” campaign and some riders are bothered by the suggestion that only men take up too much space. Subway blogger Eddie Going says he often sees all kinds of people behaving badly.

The MTA also hopes to raise awareness about commuters who wear large backpacks on crowded subways.

During November’s transit committee meeting, MTA board member Chuck Moerdler complained about crowding on the trains and specifically noted riders who keep their backpacks on instead of placing them on the floor.

The idea was not discussed further, but he later told PIX11 News that rather than ban backpacks, the agency should tweak its code of conduct to require straphangers to put them on the floor.

Other commuter complaints that will be addressed with colorfully designed placards include eating on the subway, pole hogging, nail clipping and loud music.

The courtesy campaign will also feature a series of advertisements for encouraged behaviors including stepping aside so others can get off and offering seats to the elderly, disabled and pregnant.

Developed by MTA Corporate Communications, the courtesy placards will be installed January on 2,600 subway cars, followed by buses and railroads.

Working remotely? It’s time to rethink what is ‘home’ and what is ‘travel’

(NerdWallet) - As some workers begin returning to the office this year, others have been offered the opportunity to work from home indefinitely. Twitter, Dropbox, NerdWallet and many other tech companies will let employees go fully or nearly fully remote, freeing them from commutes and packed elevators.

Yet what are the travel options and realities if you’re now working remotely? Should you become a digital nomad? Move to a new city or stay put? Is it really feasible to work in a hammock on the beach, or does that get uncomfortable?

ST. LOUIS, Mo. (KTVI) -- An invasive species of worm is wriggling its way into the Midwest.

"Jumping worms" (Amynthas spp) thrash wildly when handled, are 4 to 8 inches long, move quickly like a snake and can shed their tails when threatened.

Can you travel with kids if you’re fully vaccinated?

(NEXSTAR) - With summer travel plans heating up as the country continues to see vaccination numbers rise, many are eager to hit the road. But what do you do if you're fully vaccinated and your children are not?

"For anyone unvaccinated, the CDC is not recommending travel," said Donna Hallas, director of the pediatric nurse practitioner program at NYU Rory Meyers College of Nursing.

Can you travel with kids if you’re fully vaccinated?

‘A pillar and stalwart’: Oldest living American dies at 116