NEW YORK (PIX11) — MTA released “TripPlanner” devices on the neswest cell phones. However, it was not easy to find at first.

Apple has listed it under the name “TPPlus” and you can find it by searching that term in the app store. An Android version is not included. A web-based version is available.

Customers will be able to map directions using a full street address, landmarks, subway stations and street intersections using the app, which is now available for free in the App Store.

It also has functions that save previously searched addresses, send itineraries via email, send feedback to the MTA and find routes that use specific locations. It also includes service changes and subway detours. 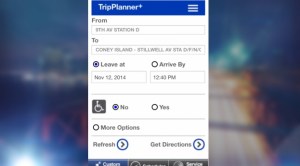 “We want to arm our customers and visitors to the New York area with ways to get around the MTA system, and TripPlanner+ does that with an intuitive, user-friendly interface. Now anyone with an iOS device can take advantage of the TripPlanner+ app for their trips,” said Paul J. Fleuranges, MTA’s senior director of corporate and internal communications.

Roadify, Moovit, Embark and Hopstop are also popular apps that use the data provided by the MTA.

US death toll from Ian rises to 17 as Florida authorities …

Forecast: Remnants of Ian to drench parts of the …

Julius Randle can make a comeback

Airbnb hosts are sick of Airbnb, too