AMITYVILLE (PIX11) –  The mother of a Craigslist escort whose disappearance spawned a serial killer investigation on Gilgo Beach finally laid 24-year-old Shannan Gilbert to rest Thursday, more than four years after the first bodies were discovered off Ocean Parkway. 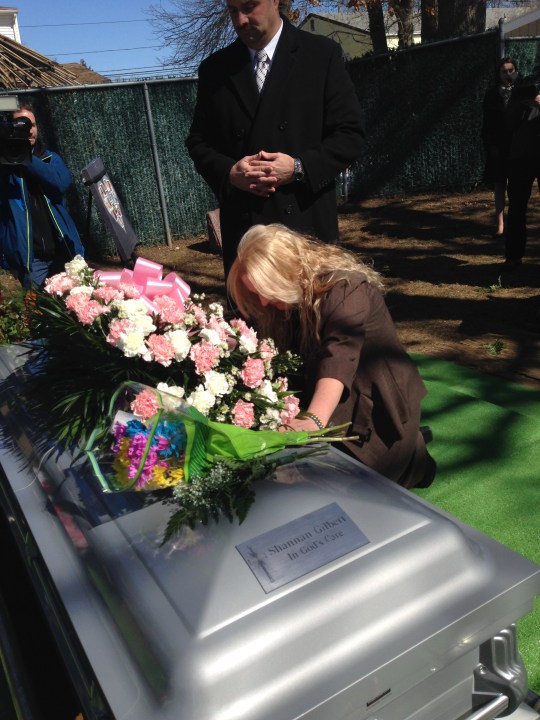 “She will never be at rest until I complete the fight to do justice,” said Shannan’s mother, Mari Gilbert, after the service. (Keith Lopez)

“There’s only one judge and that’s God,” Mari Gilbert told a throng of reporters. “It doesn’t matter how a person has lived their life, they’re still human. They still were loved.”

Shannan Gilbert, who was living in Jersey City, was last seen alive on May 1st, 2010 in Oak Beach, a private community on a barrier island in southern Suffolk County. She was banging on doors, begging for help, screaming “They’re trying to kill me.”

Gilbert was later seen running toward a marsh and vanished.

In December 2010, Suffolk County investigators, responding to a Gilbert family missing persons report, found the bodies of four women– wrapped in burlap–in the brush off Ocean Parkway.  Within several months–body parts of six, other murder victims were found, including a child’s. Most of the victims were believed to be sex workers.

Suffolk County detectives have been unsuccessful in their efforts to find who’s responsible–and there’s been heated debate about whether one killer–or two–is at work.

Mari Gilbert told PIX 11 Thursday she thinks cops have stopped looking for a suspect in a case that’s been the subject of national and international attention.

Gilbert’s body wasn’t found until a year after the first bodies had turned up. She had drowned in the Oak Beach marsh, but her family lawyer is convinced she died running from a serial killer.

“We have slogged through the slime and the muck in this case,” Ray boomed. “Lord, help the poor dead girls and the baby. Help to expose their murderer.”

The Gilbert family has filed a civil lawsuit against Dr. Peter Hackett, an Oak Beach resident who encountered Shannan Gilbert before she disappeared. Most of the complaint was tossed out by a judge on legal technicalities.

The O’Shea Funeral Home in Suffolk helped to facilitate the donation of a casket and grave. The Perry Funeral Home in Lynbrook provided a room where famed coroner, Dr. Michael Baden, performed an independent autopsy Monday night. Results are pending.  The family needed to raise money over the course of several years to get the autopsy done–and money for a burial.

Gilbert ‘s heartbroken younger sister spoke at the gravesite, talking about the things her sister liked.

Sheree Gilbert sadly added, “What we wanted to happen, happened. We found her.”

The hunt for a serial killer: Revisting the Gilgo Beach murders
Attorney for slain Shannan Gilbert says he has pinpointed last person to see her alive
Investigators believe serial killer is responsible behind bodies on Gilgo Beach

NYC man, wife get decade in prison for terror support

NYC man, wife get decade in prison for terror support