***WARNING: Content in this story is graphic and disturbing

SUNRISE, Fla. – Enraged at hearing another man’s name during a drunken sex session, a man allegedly disemboweled his girlfriend, leaving her naked body on the floor of their Florida apartment, according to police. 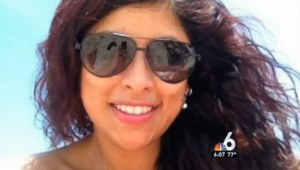 Maria Nemeth died, allegedly at the hands of a rage-fueled attack by her boyfriend. (Facebook via NBC Miami)

Fidel Lopez, 24, called police just after 3:30 a.m. Sunday, according to the Sun Sentinel, for help with his girlfriend, Maria Nemeth, who he said was having trouble breathing.

When officers arrived at the apartment on the 1600 block of Northwest 128th Drive, they found a blood-smeared, grisly scene.

Blood and tissue were streaked on the walls and doors, a sliding glass door had been shattered and there were holes in the walls of the unit the couple had shared for only a week. 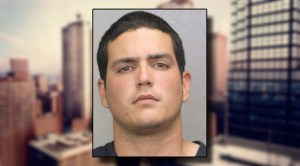 Lopez admitted to detectives that he became a “monster” after she called out her ex-husband’s name twice during sex. (Broward Sheriff’s Office)

According to the arrest report, detectives found a half empty bottle of 1800 Tequila and limes in the kitchen and believe the two had been drinking.

Lopez initially said that they had been having rough sex in the closet when Nemeth became sick and collapsed in the bathroom.

During questioning, however, Lopez admitted that he became a “monster” after hearing Nemeth call out her ex’s name twice during sex, pushing him over the edge, according to police.  He went on a rampage, tearing doors off their hinges and destroying the walls, according to the report.

He then began inserting various objects into her vagina and anus, according to the arrest report, finally inserting his arm “up to the elbow” and pulling out intestinal matter.

Lopez said he tried to wake Nemeth up by splashing cold water on her face, but couldn’t revive her.  He told detectives he started to panic and went out to smoked a cigarette on the porch before dialing 911.

Lopez has been charged with first degree murder in Nemeth’s death.

2 dead when thrown from motorcycle in Brooklyn crash: NYPD

Isles in familiar series hole, down 2-1 vs. Lightning