NEW YORK – Two of the notorious, costumed characters of Times Square once again found themselves on the wrong side of the law — this time after a brawl broke out between Hello Kitty and Minnie Mouse.

The problems began Thursday afternoon when Minnie Mouse, played by Giovana Melendez, 40, and Hello Kitty, by Sandra Mocha, 34, had a disagreement over tips for taking photos with tourists.

The argument turned physical, and police had to break up the fight around 5:30 p.m.

Both Melendez, of Passaic, New Jersey, and Mocha, of Queens, were arrested for assault and harassment after pressing charges against each other.

Minnie Mouse and Hello Kitty got arrested. The mascots had to pull together and have a family meeting. pic.twitter.com/uwp6R1L1nf

It’s just the latest in a series of ugly incidents that has the Times Square Alliance and local politicians calling for reform of the so-called “Muppet Mafia.”

“This is another reason why we need regulations to address the growing problems in Times Square,” said Tim Tompkins, president of the Times Square Alliance.

In June of 2014, police arrested Philip Williams, who was dressed as Spider-Man, after he allegedly punched and cursed at a woman who declined to tip him after posing with her children for a photo.  Tipping isn’t mandatory, but tourists have complained that the costumed characters aggressively demand money for photos. 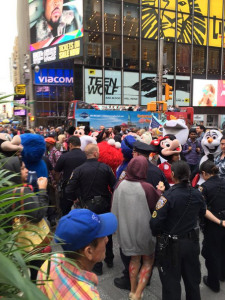 A month after that, another Spider-Man told a police officer to “mind his own f***ing business” and punched him in the face after the officer told a tourist she could tip whatever she wanted.

Spider-Man isn’t the only character behaving badly — ‘Woody’ from Toy Story was arrested for allegedly groping several young girls, and ‘Cookie Monster’ was cuffed after allegedly attacking a toddler.

In another incident, two men, both dressed as the Statue of Liberty, fought on the sidewalk after a dispute over territory.

After a spate of arrests in the summer of 2014, Mayor de Blasio called for the regulation of the unlicensed costumed horde, but no law has been enacted.