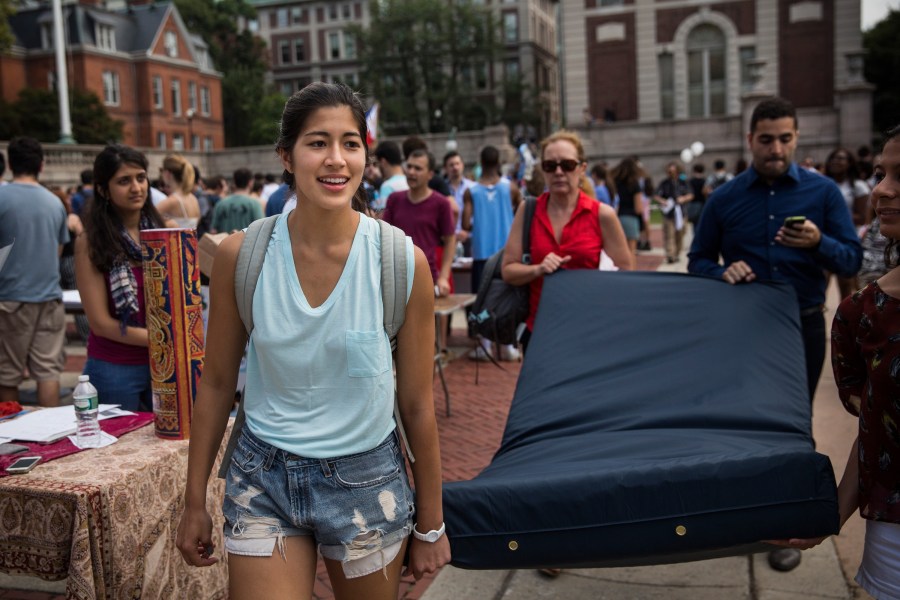 NEW YORK, NY – SEPTEMBER 05: Emma Sulkowicz, a senior visual arts student at Columbia University, carries a mattress, with the help of three strangers who met her moments before, in protest of the university’s lack of action after she reported being raped during her sophomore year on September 5, 2014 in New York City. Sulkowicz has said she is committed to carrying the mattress everywhere she goes until the university expels the rapist or he leaves. The protest is also doubling as her senior thesis project. (Photo by Andrew Burton/Getty Images)

NEW YORK – The Columbia University student who hauled a mattress to the graduation podium this spring in an ongoing anti-rape protest, has made a violent sex video.

“Everything that takes place in the following video is consensual but may resemble rape,” Sulkowicz wrote in a warning on Ceci N’est Pas Un Viol, the site it was posted to Thursday.  “You might be wondering why I’ve made myself this vulnerable. Look—I want to change the world, and that begins with you, seeing yourself.”

Sulkowicz filmed the video with director Ted Lawson over the winter break, and told artnet news that she hates being called “Mattress Girl” and wants to be thought of as a “living, breathing person who has the ability to change.”

The Mattress Performance (Carry That Weight), as she calls it, began  in 2012 after she accused another student, Paul Nungesser, of raping her in a Columbia dorm room.  Nungesser claimed the sex was consensual, and police declined to press charges.  He is now suing the school after Columbia allowed Sulkowicz to receive academic credit for her protest.

A screenshot from the sex video (via New York Daily News)

The video received immediate response, with many slamming Sulkowicz:

“No rape victim would do this, especially not one who claims to be as traumatized as you claim to be. Good job. You shot yourself in the foot,” said one commenter.

“She was sooo traumatized that she had to reenact it with the cameras rolling. Sounds legit,” said another.

Others found no artistic value, seeing it as thinly-veiled pornography:

While the comments were largely critical, Sulkowicz certainly succeeded in creating a conversation, and others praised her for it.

“i didn’t watch it, because i don’t think you want me to watch it. so i’m just going to leave a comment saying that i think this is a good idea and really makes you think about what consent actually is,” said one commenter.