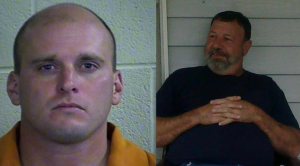 Brad Davis, 35, (left) was sentenced Wednesday to 30 years in prison for killing his stepdad, 58-year-old Denver St. Clair (right) with a wedgie

SHAWNEE, Okla. — An Oklahoma man who gave his stepdad an atomic wedgie that proved fatal was sentenced to 30 years in prison Thursday.

Brad Davis pleaded guilty to manslaughter in May as part of a plea with prosecutors. The former Marine maintained he did not mean to kill Denver St. Clair when he knocked him unconscious and pulled the ripped elastic band of his underwear around his neck.

Davis, 25, claimed he and his stepdad were in a drunken argument that St. Clair instigated by insulting Davis’s mother prior to the wedgie.

Prior to the plea deal, prosecutors had pushed for a first degree murder charge and alleged Davis fatally beat St. Clair with an object before staging the crime scene to make it appear as if the wedgie had killed him.

At the sentencing this week, Judge John G. Canavan Jr. chose the prison term recommended by prosecutors and said he found it disturbing that, instead of helping St. Clair, Davis took cell phone photos of his stepdad as he lay unconscious and gurgling.

Suspect arrested in BX hospital shooting had signed in: NYPD