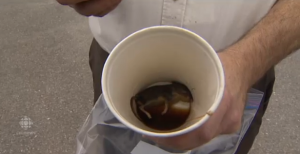 A Canadian man found a mouse inside his McDonald’s coffee. (CBC)

FREDERICTON, Canada (PIX11) — A man claims he found a dead mouse inside his McDonald’s coffee.

Ron Morais bought the coffee Monday and drank it while on his way to work, but had to stop when he got to the last sip.

“I always take the lid to get my last sip of coffee. And when I took the lid off, there was a little bit of a surprise in my coffee cup. It was a dead mouse,” Morais told CBC.

The man showed his co-workers who were also in disbelief.

“Unless I hadn’t been there and seen Ron drink all that coffee down to the last drop, I would have been like ‘You’re lying,’” Brad Peterson, one of Morais’ colleagues, told CBC.

Morais felt a “queasiness” in his stomach because of the incident. The man wants to find out how the rodent got into his cup and hopes it does not happen to anybody else.

McDonald’s Canada said there was “no evidence of pests” in the location Morais bought his coffee.

“We are continuing to investigate this isolated incident and have reached out to the customer to obtain the product sample,” the fast-food chain said in a statement to CBC.

“Until such time as we are able to collect all the necessary facts and laboratory results to conclude a full review, it would be inappropriate for us to comment further. Similarly we would also caution against jumping to conclusions until more details are available.”

CYPRESS HILLS, Brooklyn — The NYPD released new surveillance images of a man they say randomly slashed an MTA conductor across the face on a subway in Brooklyn Wednesday night.

Authorities said just before 11:30 p.m. at the Crescent Street subway station in Cypress Hills, a 52-year-old off-duty MTA conductor was aboard a southbound J train when he was approached by the unknown man.