NEW YORK (CNNMoney) — A young computer whiz from New York City has launched a site to help people buy cheap plane tickets. But an airline company and its travel partner want to shut him down.

This travel strategy only works if you book a one-way flight with no checked bags (they would have landed in Lake Tahoe). 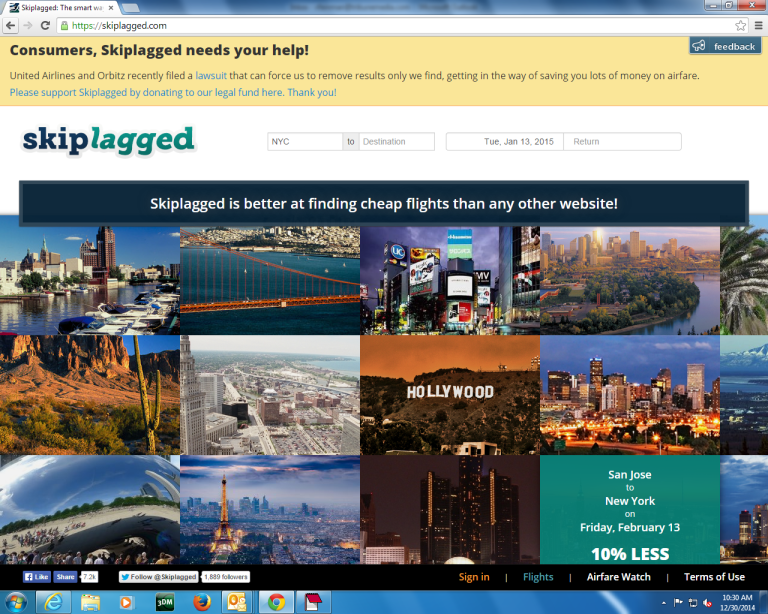 Skiplagged.com now has a banner on the top of the site with a donation fund to support the creator’s legal defense.

It’s not like these tickets are the cheapest all the time, but they often are.

In the lawsuit, United and Orbitz call Skiplagged “unfair competition” and allege that it is promoting “strictly prohibited” travel. They want to recoup $75,000 in lost revenue from Zaman.

Zaman said he knew a lawsuit was inevitable but he points out that there’s nothing illegal about his web site.

He also said he has made no profit via the website and that all he’s done is help travelers get the best prices by exposing an “inefficiency,” in airline prices that insiders have known about for decades.

“[Hidden city ticketing] have been around for a while, it just hasn’t been very accessible to consumers,” Zaman told CNNMoney.

Indeed, “hidden city,” ticketing is no secret among frequent fliers, said Michael Boyd, President of Boyd Group International, an aviation consulting firm in Evergreen, Co. Boyd worked as an American Airline ticket agent 30 years ago, and says he was trained at the airline to help customers find “hidden city” fares.

“I don’t think it’s illegal what he’s doing,” Boyd said. But lawsuits are expensive and it could end up costing the young entrepreneur who has irked the two billion dollar corporations.

Airlines usually offer cheaper fares for some destinations that are not regional hubs, Boyd said. Many of these flights are routed through more popular destinations. But if a lot of people take advantage of that discrepancy it could hurt the airlines, which is why they want to shut him down.

Born in Bangladesh, Zaman grew up in Brooklyn, N.Y., and graduated with a bachelor’s degree in computer science at age 20 from Rensselaer Polytechnic Institute. He lives in Manhattan and works at a technology start-up that he declined to name.

Zaman said Skiplagged is just a “side project.”

Zaman and United declined to discuss the lawsuit. Orbitz said in a statement that it is obligated to uphold airline fare rules.

Other travel experts say that the airlines may not achieve much if Zaman’s site is shut down, especially in a world where information is becoming more readily available.

“If [Skiplagged is] shut down, undoubtedly there will be other people to come along to scrape fares and make them available,” said Robert Mann, president of R.W. Mann & Company, an airline consulting firm in Port Washington, N.Y.

It will be the first time high school students who opted into the city’s blended learning program will return to classrooms since November, when a surge in COVID-19 cases and hospitalizations prompted the city to close all buildings and shift students to remote learning.

In honor of Women’s History Month, the New York Public Library is sharing the stories of 20 remarkable librarians who have helped build the institution and who continue to shape the way we learn.

The library is hosting a number of events, including online storytime and panels featuring authors of their top recommended books.

At least two people were stabbed, one fatally, and shots were fired during a fight at a restaurant in Rockland County Saturday night, authorities said.

The Orangetown Police Department responded to a report of shots fired outside the Oiso Restaurant along Route 303 in Blauvelt around 10:50 p.m. At the same time, police received a report of two stabbing victims that went to the hospital.

Stimulus check calculator: Do you qualify for $1,400?

Stimulus check calculator: Do you qualify for $1,400?