NEW YORK — All subway lines are expected to resume to normal service by Wednesday morning after a late-winter storm disrupted major transit lines Tuesday and spurred travel bans and restrictions on highways and bridges.

Subway service should be running with express service by 7 a.m. and bus service by 5 a.m.

MetroNorth may still be impacted by the leftover snow.

East River and Seastreak ferry service have been suspended until further notice. The Staten Island Ferry is operating on a modified schedule, with service approximately every 30 minutes.

Tractor-trailers were banned from roadways after 9 a.m. Tuesday. A travel ban begins at 1 p.m. for I-84, which runs north into Westchester County and Connecticut where the storm is hitting hardest.

Speed restrictions are in effect for the George Washington Bridge and three Staten Island Bridges, with 35 mph and 25 mph limits posted on the roadways respectively, Pat Foy, with the Port Authority of New York and New Jersey, said.

He said 99 percent of flights at LaGuardia airport have been canceled with a “significant” number of flights canceled at JFK Airport.

Before the snow even started to fall, several forms of public transit in New York and New Jersey were suspended Monday.

New Jersey Transit bus and Access Link service stopped running at 12:01 a.m. Tuesday and remain suspended for the rest of the day, according to NJ Transit.

The New Jersey State Police have responded to a reported 80 motor-vehicle crashes since midnight as of 9 a.m. 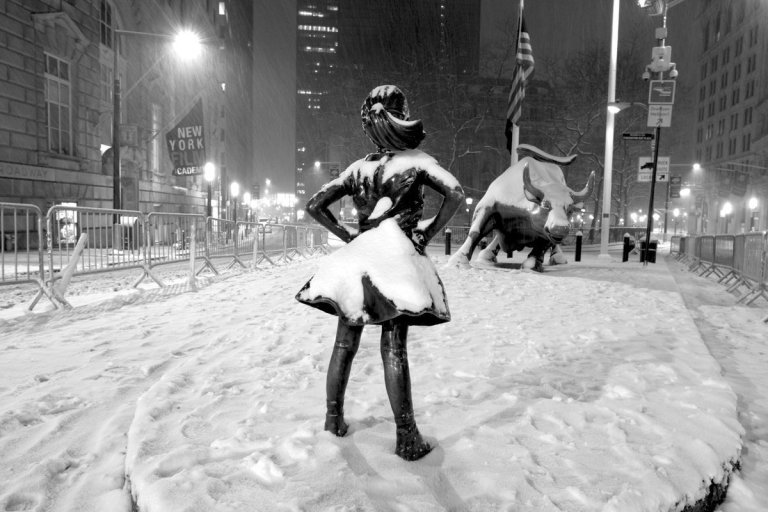 In announcing his transit plan, Cuomo declared a state of emergency, effective at midnight Monday. The storm prompted Mayor Bill de Blasio to close New York City public schools and many other area schools and agencies are closed Tuesday.

But city and state officials seemed confident that the Wednesday morning commute would be as close to normal as possible. New Yorkers are urged to stay off the roads so sanitation crews can plow and salt the roadways.