The situation began about 7:30 a.m. at 15 Destiny Court in the Mariners Harbor section of Staten Island. It was at that home that an FDNY lieutenant was shot while responding to the report of a smoke condition, allegedly caused by a man inside the home after U.S. Marshals tried to serve him an arrest warrant, police said.

The now-deceased suspect has been identified as Garland Tyree, a 38-year-old ex-con with an extensive criminal history, according to a search of New York prison records.

U.S. Marshals arrived at Tyree’s home early Friday to serve him a federal probation warrant but he allegedly refused to open the door, NYPD Chief of Detectives Robert Boyce said. That’s when authorities went to an upstairs neighbor to get a key into the apartment.

When they opened the door, they saw smoke inside and called firefighters to the scene, Boyce said.

FDNY Lt. James Hayes spoke briefly with Tyree then the suspect went silent. Thinking perhaps the man became unconscious from the smoke filling his apartment, Hayes went inside and was shot twice in his lower body, Boyce said.

The 53-year-old father of two was taken to a hospital and listed in stable condition, police said. His injuries are not life-threatening, FDNY Fire Commissioner Daniel Nigro said.

After the lieutenant was hurt, the suspected shooter barricaded himself in the home. Boyce said Tyree was alone and armed with an assault rifle.

Mom flown in from Delaware

Commissioner William Bratton said Tyree shot a weapon three times during the standoff but officers did not return fire.

Investigators brought in family members, including his sister and ex-girlfriend, to try to coax Tyree out. But he told police he would surrender only when his mother arrived, so NYPD flew her on a department helicopter from Delaware to Staten Island, officials said.

After talking with his mother for about three minutes and telling her he loves her, Tyree said he would surrender. That’s when gunshots rang out.

Bullets were fired about 11:45 a.m. out of the side of the house, officials said. Through a door on the opposite side of the home, Tyree emerged firing a gun that struck law enforcement and private cars in the neighborhood.

Agents returned fire and the suspect was killed.

“He spent most of his adult life incarcerated”

With 18 prior arrests, Tyree was behind bars most of his adult life, Boyce said. He committed a homicide when he was 16 years old, not far from where he died Friday, and was on probation until next year, he added.

Police said Tyree was a reputed member of the Bloods gang and frequently posted online about his affiliation.

Officers recovered an assault rifle from the scene near the suspect’s body, Boyce said.

The weapon recovered from the scene of shooting incident on Staten Island. Watch live: http://t.co/L3v48eM16l pic.twitter.com/Oye2PUEy4G

The post garnered several comments from concerned friends asking what was going on and urging him to be safe. Boyce confirmed the page did belong the suspect. 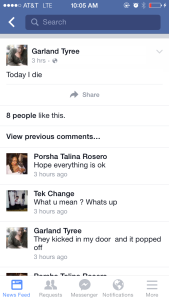 “They kicked in my door and it popped off,” Tyree wrote in the single response on the thread.

Those close to the suspect alternately described him as a giving man and an individual who was suffering.

Loved ones of the suspect watched anxiously as the negotiations unfolded.

“He’s like a son of mine. I don’t want anything to happen to him,” Larry Johnson said, describing the Tyree as a generous man who was always there to help if he needed food or a ride.

Friday’s dangerous encounter was the first time in 21 years that a New York City firefighter was shot in the line of duty, Nigro said. 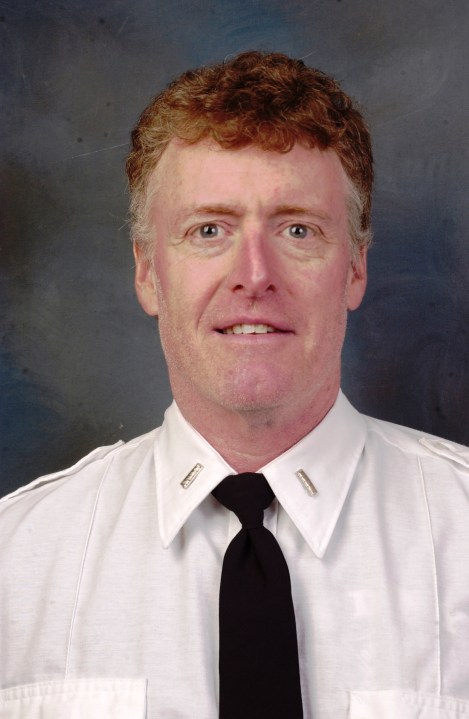 FDNY Lt. James Hayes was shot by a suspect wanted on a federal probation warrant. His shooting — the first in 21 years for the department — sparked a 6-hour standoff that ended in the suspect’s death in Staten Island on Aug. 14, 2015. (Photo: FDNY)

A father of two, Hayes is a 31-year veteran of the department who made rescues on Sept. 11, 2001, and comes from a family of firefighters, FDNY sources said.

He remained at a hospital Friday afternoon but his injuries do not appear to be life-threatening. Mayor Bill de Blasio called Hayes “remarkable” and said he was in good spirits.

Multi-grip pull-up bars promote a wide range of upper body exercises, as you can modify your grip in order to target various muscle groups.

The best place to start to build up while slimming down is with a set of dumbbells.

A good foam roller can help relieve muscle tension, muscle soreness and inflammation from your body.

SI woman loses more than half her weight after surgery

Mild temps in the forecast for tri-state area this …

Family of soldier killed at Alabama base believes …